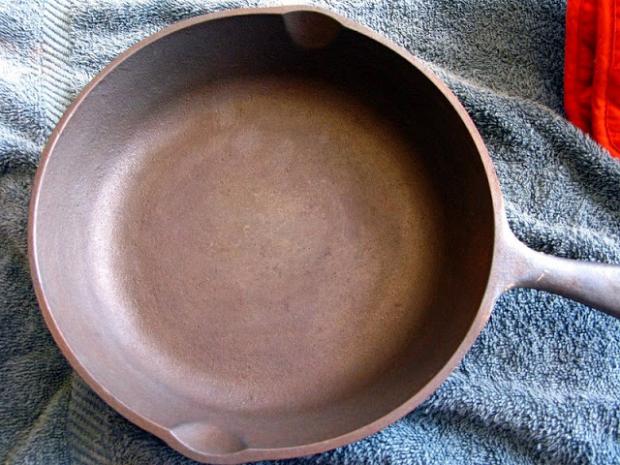 Most people I know think that cast iron skillets are solely for making cornbread or for frying. I use mine for everything from homemade cinnamon rolls & scrambled eggs, to steaks and roasted chickens. The only thing I DON'T do in my cast iron is boil water.
I seek out older cast iron pieces, made back when the pieces were machine polished to a smooth glassy surface after casting. All newer pieces are simply cast, and will have a more textured surface. Since I prefer old pieces, I typically find cast iron cookware in poor shape; neglected, rusty, and coated with years of caked-on burned food and seasoning. Luckily, these pieces can be fully restored for just a few dollars, a bit of elbow grease and patience.

Greg has a great restoration tutorial over on his Black Iron Blog. His method is the one I have used for over 10 antique pieces so far, all with amazing results.


I picked up this Birmingham Stove & Range skillet and this Griswold skillet at a local junk store. Both pieces have some surface rust as well as caked-on seasoning and grime. But, both set flat and do not have any cracks. I've found that, the grungier & rustier the piece, the cheaper the price.

All that is needed for the reconditioning process are a few inexpensive, readily available items:

*EDIT 05/2012* This post has become VERY popular recently thanks to Pinterest! Since some commenters have had some concerns about the oven cleaner, I wanted to give a little more information about the chemicals. Oven cleaner contains lye, which IS a caustic agent, typically sodium hydroxide or potassium hydroxide. The lye residue is washed off of the skillet, neutralized with an acid soak (vinegar), then washed again and coated with seasoning.Lye is used in many everyday items such as soap; it also shows up in food preparation, from olive curing, to lutefisk (eww), to making authentic pretzels. It's also used for biodiesel!

Lye is very hygroscopic, meaning it will pull moisture out of the air. This is why, when being used on grimy cast iron, the aerosol foam ends up becoming a brown liquid. It's dissolving when it contacts the air, which results in VERY little if any of the lye being absorbed into the metal.

Even groups such as the Griswold & Cast Iron Cookware Association RECOMMEND the oven cleaner method for reconditioning cast iron.

Some people advise using high heat or a self-cleaning oven cycle (which uses high heat) to clean cast iron. I shy away from this method mainly because the majority of my cast iron collection is antique. High heat CAN and WILL warp or even crack fragile cast iron. Plus, my oven doesn't have a self-cleaning cycle. I also can't simply throw my cast iron in a fire, being that I live in the suburbs, and setting yard fires is strongly frowned upon here!

*EDIT 06/2014*  Please read through the entire post and comments before posting questions. Many questions being posted have been answered in the comment section. Unfortunately, I've had to turn comment moderation on due to some commenters not being able to behave like civilized adults.

Coat the cast iron piece (top and bottom) with the oven cleaner, making sure to wear gloves. Oven cleaner is basically aerosolized lye foam and is very caustic. It WILL burn your skin. Place the coated piece in a garbage bag and seal tightly to prevent the oven cleaner from drying out.

This is where patience comes in. You will need to wait several days for the oven cleaner to loosen and remove the old seasoning. I usually check after 2 days, then wipe off the cleaner and apply a fresh coat and check again after 3 days.

For especially grimy pieces, letting the pieces soak for about a week is usually sufficient. Once the old seasoning has been removed, the skillet will be restored to it's original cast. The iron will be a silvery-gray color. There may still be surface rust present, which has to be removed before the skillet can be seasoned.

Remove the lye and old seasoning by wiping off the grime with a paper towel and then washing the skillet with hot water.

Next, the lye needs to be neutralized, and any surface rust will need to be softened to make it easier to remove. Soak the cleaned skillet in a 2:1 solution of hot water and white distilled vinegar for 30-60 minutes. This should soften any surface rust enough that it can be easily scrubbed away with steel wool. Wash the skillet with soap and hot water and dry it thoroughly.

At this point, the skillet has been cleaned down to the bare metal and must be seasoned immediately to prevent rusting (especially here in Alabama with our humidity!).

To season, place the cleaned, dry skillet upside-down in a 250-degree oven for 15 minutes. Increase the temperature to 500 degrees and let the skillet heat up for 45 minutes. At this point, the skillet will be EXTREMELY hot, so be careful removing it from the oven. Turn off the oven.

Season the skillet with a coating of lard. I render my own lard for cooking and baking, but use inexpensive storebought lard for seasoning. Some people also use shortening (Crisco) or olive oil. Rub the lard all over the entire skillet with paper towels; the hot skillet will absorb the oil and begin to turn brown. The oil will likely smoke as well; this is normal. Using clean paper towels, rub off the excess oil so that the skillet just appears wet. With seasoning, like painting, your aim should be for multiple thin layers rather than a single thick layer.

Return the oiled skillet to the oven (upside-down to prevent pooling) and let the skillet cool while the oven cools. Wipe any excess oil off every 10-15 minutes to prevent any pooling or buildup. Every 30 minutes or so, repeat seasoning with a fresh application of lard or oil, remembering to wipe off the excess oil. After one hour, open the oven door slightly to help cool the oven faster.

At this point, the skillet should be completely reconditioned, seasoned and ready for use.

Birmingham Stove & Range Skillet, Before & After

Birmingham Stove & Range Skillet, Before & After

Griswold Skillet, Before & After

Griswold Skillet, Before & After

It will take time and additional layers of seasoning before the piece becomes black and glossy. To preserve the seasoning, do not use soap on the skillet unless absolutely necessary.

The best way I have found to care for my cast iron is to clean the pieces while still hot after cooking. My well-seasoned pieces need little more than a wipe with a clean paper towel. On occasion, depending on what was cooked, I will use hot water and a nylon scrubber (see the Amazon link below for the brand I prefer). Afterwards, I towel-dry the skillet thoroughly and warm it over a low to medium-low burner to be sure that all of the moisture has evaporated. I then apply a tiny bit of lard to the skillet while still hot, and, using clean paper towels, remove all of the melted lard except for the thinnest possible layer.

I also store my skillets stacked with paper towels in between each one to prevent scratching and to absorb any moisture.

The best way to quickly build up a good layer of seasoning on cast iron? Use it! Cook as many meals as possible in your cast iron. It will thank you with years of use and provide you with an heirloom piece of cookware to pass down to another generation.
951K+ 951K+

Yerba Mate: The Ethical and Healthier Alternative to Coffee

Fermented Foods: How to 'Culture' Your Way to Optimal Health