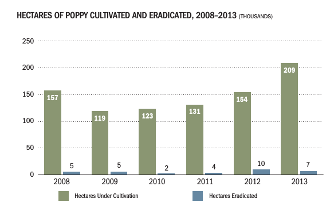 There are plenty of failures to focus on in Afghanistan, but while they usually center around the calamitous US military occupation, another US war in the country, the “war on drugs” continues apace, with similarly feckless results.

12 years into this war, and with $7.5 billion spent, the latest figures (PDF) from the Special Inspector General for Afghanistan Reconstruction (SIGAR) show remarkable consistency, as the US continues to throw money and manpower at poppy eradication and appears to have no real impact on cultivation or export.

2013 saw a record 2,090 square km of Afghanistan used for poppy cultivation, and the grand US eradication program managed to destroy roughly 70 of them, so roughly 3.5% of the overall total.

That’s not even slowing them down, as poppy production in 2012 was 1,540 square km, so the US eradication isn’t even putting a meaningful dent in the rate of growth of the cultivation, one of the few viable crops for many Afghan farmers.