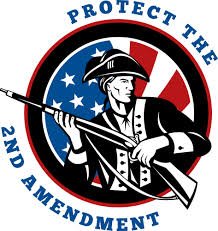 GRAND ISLAND, NY – The parents of a Grand Island High School sophomore confirm their son was recently made to serve a one day in-school suspension, resulting from his refusal to change clothes after a determination the shirt he was wearing violated the school's dress code.

Wayne and Kim Kinney describe their son Shane, 16, as an avid outdoorsman and hunter.

Shane, like his parents, is also a member of the National Rifle Association (NRA).

The Kinneys say their son recently went to school wearing a tee shirt depicting his support of the NRA and the 2nd Amendment of the United States Constitution.

"It's the same shirt he's worn before, but this time they said something about it," Wayne Kinney told WGRZ-TV.

According to his parents, a teacher at the high school told Shane the shirt was inappropriate.

"They said it was the guns," said Mr. Kinney, noting the NRA emblem over crossed rifles adorning the shirt.

While the school dress code mandates that attire not "disrupt or interfere with the educational process," it does state anything specifically against the promotion of political causes or the depiction of firearms.

And while there is a section which prohibits clothing which might "encourage ...violent activities"

Shane's mother, who is also in the NRA and works at the school, says the shirt does not fit that bill either.

"Just by wearing the shirt, yes it has guns on it, but it doesn't mean you are for any kind of violence," Kim Kinney said.

But when told to either change shirts, or turn the one he had on inside out, Shane stuck to his guns.

"He said he'd rather not turn it inside out," said Shane's father.

Shane's refusal to comply was what ran him afoul of another section of the dress code that states:

"Any student who refuses to do so or who... fails to comply shall be subject to discipline."

Shane's choice also earned him a day of in-school suspension,

The Kinney's believe the school over-reacted and their son did not deserve to be suspended.

However, they say they have had some discussions with Shane regarding the matter, which they also view as a learning opportunity.

One important lesson, they say, is to stand up for what you believe in, which they encourage Shane to do.

However, there is also another important lesson that every person must eventually learn, and that is when to pick your battles. And, they consider this one to be over, with no intention to pursue the matter any further.

"Shane will probably not wear shirts like this to school anymore," said his mother. "He can hold firmly to his beliefs but for those 7 hours a day, five days a week he's in school, you have to kind of follow their rules like it or not. But he'll move on, he'll graduate, and probably serve our country and wear lots of shirts like that," she said.