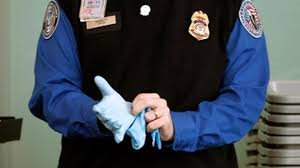 It reminded me of the scene at Chicago’s U.S. Army Induction Center on Van Buren Street in June 1967. Everybody stripped to their underwear, herded along (“Follow the yellow line…. You there, follow the red line”) – and everybody bending over.

Then he stuck his rubber gloves under a machine that made a loud beep.

Red flag. My clothes were apparently infested with explosive residue. I explained that I was a hunter, and that I wasn’t surprised.

Mr. Tate then called his supervisor, two-striper Christopher Anderson, who told me that the explosive residue meant that I had to get a more thorough pat-down, this time complete with a genital check, in a closed room.