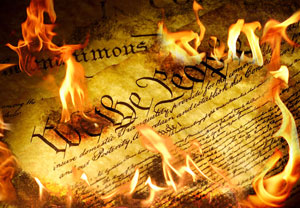 When the original 13 states came together to discuss the possibility of establishing a confederacy, at the urging of Benjamin Franklin (“Join or Die”), they did so with a great deal of hope, but also a great deal of trepidation. The hope was that a federal government might be formed that could provide greater security and stability to the colonies.  The hope was that it might handle the few issues that were common to all the states but which could not be dealt with by the states individually. The fears, on the other hand, were that this government might come to gain an enormous amount of power; that this power might come to be concentrated in the hands of very few; and that the federal government as a whole might end up overreaching its authority and end up meddling in affairs that ought rightly to be left to the states and the various local governments (if not individuals themselves).

(3) Government power structure was split between two co-equal sovereigns – the individual states and the federal government (emphasized or restated by the Tenth Amendment); and (4) A Bill of Rights (“further declaratory statements and restrictive clauses to prevent the government from misconstruing or abusing its powers..”) to put further limitations on government power.

For 200 years, this structure has been eroded, always at the hand of the federal government. After numerous overt acts of usurpation, constitutional amendments, and loose interpretations of the Constitution itself, each of the branches of government has managed to seize more power than it was ever meant to have. Now, as we see and feel most acutely, the federal government involves itself in matters that are neither federal in nature nor are subject to its jurisdiction.  It insinuates itself into virtually every aspect of public and private life, including political, economic, and social.  When we listen to a young mother in Alabama cry because the new healthcare mandate has increased her insurance premiums each month by over $100 and has presented her with a dilemma that is causing her great heartache and distress (she wants to work and do the right thing, but if she does, she can’t afford the increase in healthcare premiums, and so she is faced with the choice that puts and her family on welfare), then we understand how destructive the government has become and how far it has strayed from its intended purpose.