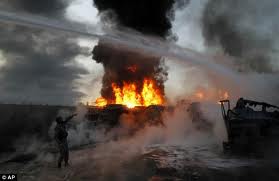 Ike ended the Korean conflict in 1953, refused to intervene to save the French at Dien Bien Phu in 1954, and, rather than back the British-French-Israeli invasion, ordered them all out of Egypt in 1956.

For, while ending wars without victory may not garner from the historians’ the accolade of “great” or “near great,” it is sometimes the duty of a president who has inherited a war the nation no longer wishes to fight.

That was Nixon’s fate, as well as Ike’s, and Obama’s.

And as we look back at our interventions in the 21st century, where are the gains of all our fighting, bleeding and dying?

After Moammar Gadhafi fell in Libya, the mercenaries he had hired returned to Mali. The French had to intervene. In Benghazi, the city we started the war to save, a U.S. ambassador and three Americans would be murdered by terrorists.