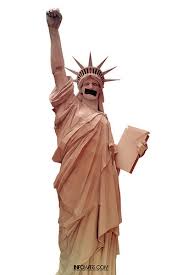 An unnamed official with the NSA told a reporter during a recent media “open day” that President Obama should crack down on the free press, and that the First Amendment should be reformed.

In his piece for Foreign Policy, reporter Daniel Drezner explains how NSA officials are so completely out of touch with the Constitution and Bill of Rights that they simply cannot fathom why people are so upset with the actions of the spy agency with regards to monitoring Americans’ communications.

In a key revelation, Drezner notes:

“The NSA’s attitude toward the press is, well, disturbing. There were repeated complaints about the ways in which recent reportage of the NSA was warped or lacking context. To be fair, this kind of griping is a staple of officials across the entire federal government.”

“Some of the NSA folks went further, however.” Drezner explains.

“One official accused some media outlets of ‘intentionally misleading the American people,’ which is a pretty serious accusation. This official also hoped that the Obama administration would crack down on these reporters, saying, “I have some reforms for the First Amendment.”

Clearly this anonymous official has no concept of what a free press is, and that the very definition is protected under the First Amendment. Government agencies, cannot simply “reform” the law of the land to avoid scrutiny, and neither can single branches of government for that matter.