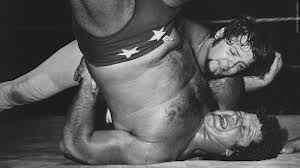 Pro-wrestler Glenn Jacobs, aka Kane, slammed the TSA (pun intended) in a recent speech before the Liberty Political Action Committee (LPAC), stating that the idea the government agency protects the nation is a complete joke.

Pro-wrestling and politics don’t often mix, but when they do it tends to get interesting, as Jesse Ventura will attest to. Jacobs pinned his Libertarian leanings to the mast some years ago, declaring his support for former Congressman Ron Paul. But recently, Jacobs has become more vocal concerning fierce protection of liberty from big government.

“Since I just flew in last night and it’s fresh on my mind, I thought that I would start with the TSA,” Jacobs told the group in a keynote speech from September that appeared on the LPAC website this weekend.

“TSA is such low hanging fruit, I mean, anybody can bash the TSA.” Jacobs added, before launching into several of his own personal experiences at the hands of America’s Blue goon squad.