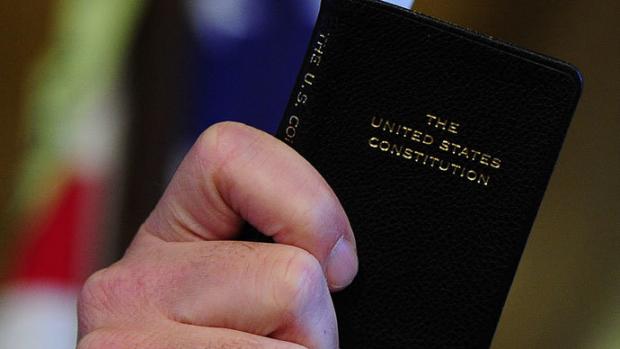 Robert Van Tuinen, 25, was attempting to hand out complimentary copies of the US Constitution at Modesto Junior College in central California on Tuesday when a police officer informed him that he could only distribute pamphlets on campus if done from within a designated free-speech area that requires weeks of notice to reserve.

“Anytime anything is being passed out it has to be… you have to go through the Student Development office,” said the officer.

When the student said he wanted to start a group named Young Americans for Liberty, the officer said, “That’s fine, but if you’re going to start an organization like that you have to go through the rigamarole.”

Van Tuinen raised his objections with the officer and recorded video of the confrontation, as well as an impromptu meeting shortly after with a campus administrator, who told the student there is "a time, place and manner" restriction when it comes to distributing material on campus. The earliest he could be allowed to demonstrate “in front of the student center, in that little cement area" would be September 20, she told him, and at one point dismissively said "you really don't need to keep going on."

1 Comments in Response to Freedom of speech? College student stopped from handing out copies of the Constitution

WHERE IS OUR MILITARY AND OATH KEEPERS?