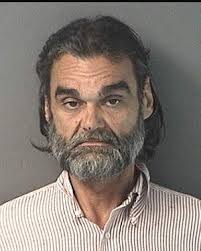 The bizarre incident began about 5 p.m. when neighbors saw Norbert A. Chabannes, 55, crawling across a yard in the 14000 block of Canal Drive, the Escambia County Sheriff's Office said.
Chabannes, who has one leg, was naked and cut his arm while attempting to break into the home of his next-door neighbor, Collins Haines. When he was unsuccessful, he crawled across the street to Irma Teal's house where he tried to throw a cinder block through a window.
A deputy arrived to find Chabannes in the yard, delirious and covered in blood and sweat. As the deputy attempted to reason with Chabannes, he collapsed, the Sheriff's Office said.
Escambia County Emergency Medical Services and law enforcement officials tried to resuscitate Chabannes, but were unsuccessful.
To neighbors, Chabannes' strange and violent actions were not wholly unexpected.
Neighbors said he lived alone in a house that his family has owned for years.
They were aware of his prior arrests for cocaine possession and possession of drug paraphernalia and his stints in jail.
Further investigation by law enforcement revealed that Chabannes had earlier arrived at his home Monday and became confrontational with Rochelle Duke - his housekeeper - gouging her eyes and banging her head repeatedly against a wall before she was able to flee.
The Florida Department of Law Enforcement is investigating the incident."They would investigate anytime a person died when involved in a deputy confrontation," Escambia County Sheriff's Office spokeswoman Rhonda Ray said Tuesday afternoon.
Teal could not say enough good things about the public safety responders.
"Everybody in Escambia was here," Teal said. "First responders, the fire department ... There were over 20 people here.
"The first responding police officer was nothing but professional. Everyone that showed up here to assist ... We have a wonderful group of people out here. They're just real professional."