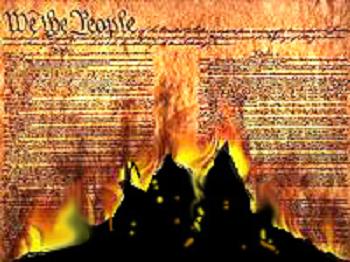 I know, I know. It’s a Russian thing. When we’re about to do something stupid, we like to catalog the full extent of our stupidity for future reference.
– Susan Ivanova, Babylon 5

Perhaps I have some Russian blood in me. Even though I’m not particularly a fan of the US Constitution (I would have come down on the side of the Anti-Federalists), I still say it’s time to take a moment and catalog what has happened to America.

I am under no impression that this is going to wake people up, by the way. Most Americans just don’t want to know. In fact, they pay people to tell them that everything is okay and that the people who complain are crazy, stupid, losers, or conspiracy believers.

Still, I want to catalog the extent of the current stupidity for the next generation – and to kill the lie that no one from my generation “saw it coming.”

Whatever our opinion of the US Constitution, it has clearly been the standard of reference in America and the trashing of this document matters for the future of the American people.

So, I will briefly explain what has happened to each of the ten amendments which make up the crucial section of the US Constitution: the Bill of Rights.

This one has been voided repeatedly and on many fronts. Here are just a few examples:

Wrong political speech gets you targeted by the IRS Speaking for the Constitution, or Ron Paul, or against abortion (and much more) marks you as a dangerous person Using coded speech brands you as dangerous

And there are many more instances. You have free speech only until you reach the end of your leash.

A well-regulated Militia, being necessary to the security of a free State, the right of the people to keep and bear Arms, shall not be infringed.

More or less all levels of the US government (along with their sycophants) are openly at war with the right of the people to bear arms. I won’t bother itemizing anything here.

No Soldier shall, in time of peace be quartered in any house, without the consent of the Owner, nor in time of war, but in a manner to be prescribed by law.

So far as I know, this one hasn’t been trashed yet. (There really is no need these days.)

The right of the people to be secure in their persons, houses, papers, and effects, against unreasonable searches and seizures, shall not be violated, and no Warrants shall issue, but upon probable cause, supported by Oath or affirmation, and particularly describing the place to be searched, and the persons or things to be seized.

And what are our “papers”? That HAS TO include emails, which took over from “papers” very directly.

The US government, on almost every level, has become a full-blown surveillance state, far beyond the Statsi’s wildest dreams. The National Security Agency alone spends billions of dollars per year to directly violate the 4th amendment. It’s not even close.

Most people have seen the stories of whistleblowers, NSA rooms at AT&T, and covert agents admitting it all. Those who want to know, know.

These organizations hide behind dozens of laws, stacked one upon another, but it’s all complication and misdirection: The right of people to be secure in their papers (correspondence) is plain. And this amendment is purposely trashed on a daily basis.

No person shall be held to answer for a capital, or otherwise infamous crime, unless on a presentment or indictment of a Grand Jury, except in cases arising in the land or naval forces, or in the Militia, when in actual service in time of War or public danger; nor shall any person be subject for the same offence to be twice put in jeopardy of life or limb; nor shall be compelled in any criminal case to be a witness against himself, nor be deprived of life, liberty, or property, without due process of law; nor shall private property be taken for public use, without just compensation.

There are too many trashings to be mentioned here. But we can start with the President of the United States killing US citizens with no trial, and then defending his right to do so.

We could go on with the standard police tactic of intimidating people until they testify against themselves, and much more.

In all criminal prosecutions, the accused shall enjoy the right to a speedy and public trial, by an impartial jury of the State and district wherein the crime shall have been committed, which district shall have been previously ascertained by law, and to be informed of the nature and cause of the accusation; to be confronted with the witnesses against him; to have compulsory process for obtaining witnesses in his favor, and to have the Assistance of Counsel for his defence.

A speedy trial? Tell that to Bradley Manning.

As for the rest of this amendment, tell it to Brandon Raub.

In suits at common law, where the value in controversy shall exceed twenty dollars, the right of trial by jury shall be preserved, and no fact tried by a jury, shall be otherwise re-examined in any court of the United States, than according to the rules of the common law.

The right to a jury trial still exists, so far as I know, but only if you can make it through the legal process that far. First of all, the costs of a trial are far beyond the ability of most Americans to pay. Secondly, government prosecutors can wear you down and bully you in a dozen ways.

Mixed reviews on this one.

Excessive bail shall not be required, nor excessive fines imposed, nor cruel and unusual punishments inflicted.

Cruel and unusual punishments? Well, the boys in DC don’t draw and quarter people, so that’s good. But they did torture Bradley Manning (see link above), and the US government has tortured hundreds of people in Guantanamo. They can try to split hairs over US soil and citizenship all they like, but this amendment specifies what they shall not do.

The enumeration in the Constitution, of certain rights, shall not be construed to deny or disparage others retained by the people.

The powers not delegated to the United States by the Constitution, nor prohibited by it to the States, are reserved to the States respectively, or to the people.

DC is king, and through abuse of the “commerce clause” they control almost every activity Americans undertake.

The people who have joined themselves to big corporations don’t care. They think government partnerships are good for them, and as long as the paychecks keep coming, they will oppose almost nothing government does. The people taking government checks need the government and will not make the slightest motion against them. Average working people generally break down into two camps:

Those who know that everything teeters on the edge but who aren’t emotionally prepared to face it. They hope it will all go away and grasp for reasons to believe. Those who trust their own minds and raise an alarm. (And who suffer in varying degrees for the crimes of seeing and caring.)

One of these days, the people of my generation will go around saying, “We didn’t know.” Don’t let them get away with it.