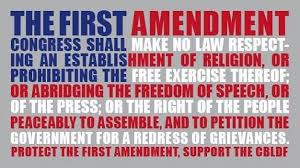 WASHINGTON, DC — Declaring a federal ban on expressive activity on the U.S. Supreme Court plaza to be “repugnant” to the Constitution, a District of Columbia federal court has struck down a 60-year-old statute which broadly prohibits speech and expression in front of the United States Supreme Court. The court’s ruling comes in response to a lawsuit filed by The Rutherford Institute on behalf of Harold Hodge, a 46-year-old African-American man who was arrested in January 2011 while standing silently in front of the U.S. Supreme Court building wearing a sign voicing his concerns about the government’s disparate treatment of African-Americans and Hispanics. In a ruling issued in Hodge v. Talkin, et al., District Court Judge Beryl L. Howell struck down a federal law that makes it unlawful to display any flag, banner or device designed to bring into public notice a party, organization, or movement while on the grounds of the U.S. Supreme Court, declaring that the “the absolute prohibition on expressive activity [on the Supreme Court plaza] in the statute is unreasonable, substantially overbroad, and irreconcilable with the First Amendment.”

“Judge Howell’s frank, no-holds-barred ruling affirming the Supreme Court plaza as a free speech zone throws a lifeline to the First Amendment at a time when government officials are doing their best to censor, silence and restrict free speech activities,” said constitutional attorney John W. Whitehead, author of A Government of Wolves: The Emerging American Police State. “There are a good many things that are repugnant to the Constitution right now—mass surveillance of Americans, roadside strip searches, forcible DNA extractions, SWAT team raids, civil commitments for criticizing the government, etc.—but this ruling at least sends a message all is not lost as long as we still have some members of the judiciary who understand and abide by both the letter and the spirit of the rule of law, our U.S. Constitution.”

On January 28, 2011, Harold Hodge quietly and peacefully stood in the plaza area near the steps leading to the United States Supreme Court Building, wearing a 3’ X 2’ sign around his neck that proclaimed: “The U.S. Gov. Allows Police To Illegally Murder And Brutalize African Americans And Hispanic People.” The plaza is a place where the public is allowed to gather and converse and is in all relevant respects like a public square or park where citizens have traditionally met to express their views on matters of public interest. However, Hodge was approached by a police officer who informed him that he was violating the law and issued him three warnings to leave the plaza. Hodge refused, was handcuffed, placed under arrest for violating 40 U.S.C. § 6135, moved to a holding cell, and then was transported to U.S. Capitol Police Headquarters where he was booked and given a citation. The charge was dismissed in September 2011 after Hodge complied with an agreement to stay away from the Supreme Court building and grounds for six months. In asking the U.S. District Court to declare 40 U.S.C. § 6135 unconstitutionally vague and overbroad in violation of the First Amendment, Rutherford Institute attorneys argued that absolute prohibition on speech and expression on the Supreme Court plaza is unreasonable and unnecessary to protect any legitimate governmental interest with respect to the Court or its proceedings. Affiliate attorney Jeffrey Light assisted The Rutherford Institute in securing the victory for Hodge.

This press release and the court's ruling in Hodge v. Talkin is available at www.rutherford.org.