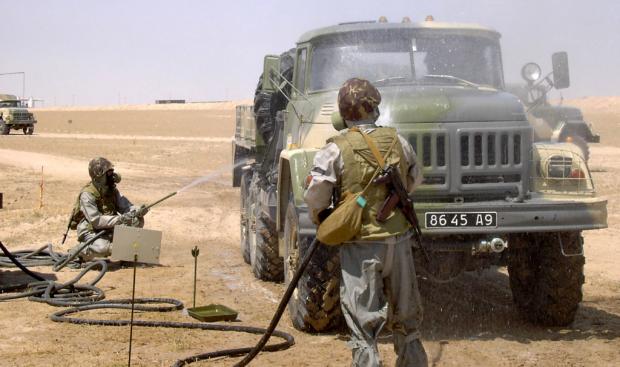 Soldiers are deserting a beleaguered Iraqi army as it struggles to keep its hold on the northern half of Iraq in the face of escalating hostility from Sunni Arabs and Kurds who dominate in the region.

Around the oil city of Kirkuk Kurdish troops have advanced south to take over military positions abandoned by the army, while in Baghdad senior Iraqi politicians say that for the first time there is talk of partitioning the country.

The current crisis was sparked on 23 April when the Iraqi army attacked a sit-in protest in the Sunni Arab town of Hawijah, killing at least 50 people and injuring 110. Outraged Sunni Arab protesters have since stepped up their demonstrations against the Shia-led government. Demonstrators are increasingly protected by armed men, some of whom are accused of dragging five military intelligence soldiers in civilian clothes from a car that came near a protest in Fallujah and killing them.

There are signs that the Iraqi army can no longer cope with a crisis in which it is confronting both Sunni Arabs and Kurds. Many soldiers prefer to desert the army rather than shoot at protesters said Najmaldin Karim, the Kurdish Governor of Kirkuk, where Hawijah is situated, in an interview with The Independent. Most deserters are Sunni, Mr Karim said, but he added that some are Shia who don’t want to fight in strange places for something they don’t believe in.

Mr Karim, formerly a doctor in the US, confirmed that Kurdish troops have moved to take over positions around Kirkuk left vacant by the Iraqi army, but vehemently denies that this is a land-grab by the Kurds seeking to take over the oilfields as Iraqi army commanders have alleged. Affirming that Kurdish forces have taken over places vacated by the Iraqi army, he explained that Iraqi military units are under orders to leave their outposts at night and concentrate in defensible positions.

“They [Iraqi army commanders] are playing on people’s emotions and trying to detract from the fact that they attacked civilian demonstrators and killed scores of them at close range.”

Mediators seeking to end the protest in Hawijah last week say they only needed another six hours to end the confrontation when the army attacked.