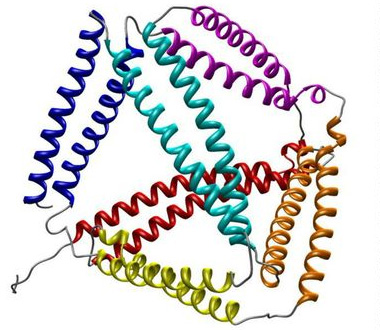 builds upon the advances of DNA origami, a technique that has been used to build box shapes, DNA scissors and other materials. Now, bioengineers have produced a single-stranded coil of protein that spontaneously sprang into a pyramid shape. While just an early demonstration, the technique could someday be used to make vehicles for drug delivery or to catalyze reactions.

"It is a piece of great work in the field of programmed biomacromolecular self-assembly," said chemist Chengde Mao of Purdue University in Indiana, who was not involved in the study. "The beauty of the strategy is its simplicity." [Biomimicry: 7 Clever Technologies Inspired by Nature]

Proteins are the molecular building blocks that carry out a host of vital functions in cells. They are composed of long chains known as polypeptides, which coil and fold to form complex 3D

The idea with protein origami is to create rigid segments that can self-assemble in a modular fashion, like LEGO bricks. The segments are "smart" materials, because they contain all the information for the final structure inside them.