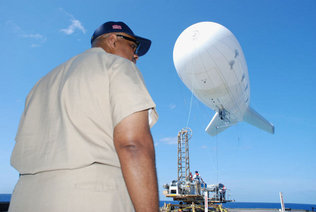 On the flight deck of the HSV 2 Swift, U.S. Navy Rear Adm. Sinclair Harris received instructions Friday on how to launch the 13-pound drone that looks like a model airplane built by a teenager in the family garage.

“Raise it when we’re ready,” a civilian operator told the commander of the U.S. 4th Fleet. “It’s a piece of cake.”

Harris did as told, launching the Puma AE (all environment) — a waterproof, unmanned aircraft — into the vast blue yonder of the Florida Straits to track and provide real-time video of a go-fast boat in a mock drug smuggling operation.

“So easy, even an admiral can do it,” Harris joked.

It was a test to see if the relatively low-cost drone, which runs on battery power, could be an alternative to manned aircraft such as the P-3 Orion, which requires a crew of seven and guzzles fuel.

The Navy is trying to get creative to continue its never-ending war on drugs during these tough economic times, in which its budget has been further squeezed by new mandatory cuts triggered by the recent federal sequester.

In March, the Navy announced the budget cuts were forcing it to stop the deployments of two of its frigates, the USS Gary and the USS Thach, that were patrolling the Caribbean and eastern Pacific for traffickers of drugs, people and guns.

That’s why the 321-foot Swift also was carrying an unusual sight for a ship — a big white blimp that was moored next to the big X that marks the spot for helicopter landings.