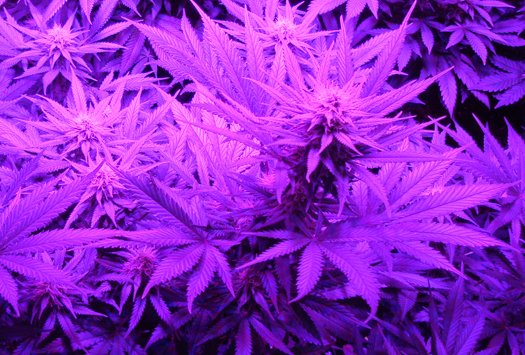 As of 2013, 24 states and Washington, DC, have either legalized marijuana or decriminalized possession of it. One of my friends lives in a state where medical marijuana is now legal, and he has taken full advantage of this to start growing the plant, which helps him manage the symptoms of a chronic illness, in his basement. Rather than use his real name, I'll just refer to him by his online handle, GrowingGreenLED. I've known GGL for years, and I knew that even when it was illegal, he used marijuana for medical reasons. The whole grow-your-own was a new thing for him -- and me. Curious about the enterprise, I asked if he'd be willing to chat with me about the ins and outs of growing one's own plants. In particular, I was curious about his all-LED setup.

LED lights have been taking over all areas of normal life, replacing horrible blue-tinted compact fluorescents, incandescents, and even specialty bulbs (stage lighting, street lights and the like) such as metal halide high-intensity discharge lamps or high-pressure sodium lamps, but they're still something of a controversial topic in the pot-growing world. Until recently, they simply did not put out enough photons to keep plants happy. LED technology has improved markedly over the last five years, and today's 10-watt diodes can give out something like 800-900 lumens, on par with standard metal-halide grow lamps, and slightly lower than high-pressure sodium.

In order to grow healthy marijuana plants, then coax them to flower and produce a lot of cannabinoids, the grower must provide the plants with lots of light of the proper wavelengths, control the length of "day" that the plant experiences during its life cycle, and control the temperature so as to not stress the plants.