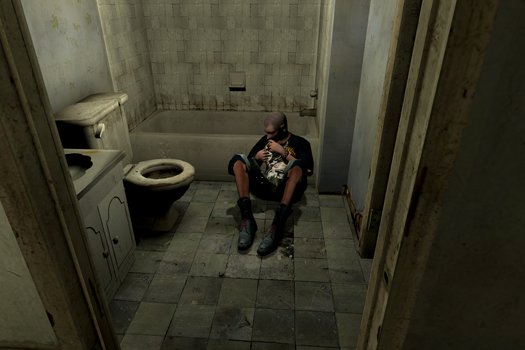 When the addicts enter the room, they haven't met the people inside. They've never been there before, but the setting is familiar, and so is the pipe on the table, or the bottles of booze on the ground. Soon enough, someone's offering them a hit, or a drug deal's going down right in front of them.

They've been trying to get better--that's why they're doing this--but now they have cravings.

It's about then that a voice instructs them to put down the joystick and look around the room without speaking, "allowing that drug craving to come and go like a wave." The voice asks them periodically to rate their cravings as, after a couple minutes, they start to relax. The craving starts to dissipate and they hear a series of tones: beep-boop-boop.

It's all being orchestrated by a wizard behind the virtual curtain: Zach Rosenthal, an assistant professor at Duke. For years now, with funding from the National Institute on Drug Abuse and the Department of Defense, Rosenthal has been running virtual reality trials like this with drug addicts in North Carolina (and veterans, hence the DOD funding) who are trying to recover. About 90 people, passing in and out of the NIDA study, have been coming to Rosenthal for treatment through virtual reality. They're hooked up to a virtual reality simulator and dumped somewhere (a neighborhood, a crack house) where the researchers can slowly add cues to the environment, or change the environment itself, altering the situation to based on each patient's history and adding paraphernalia (drugs, a crack pipe) as necessary.