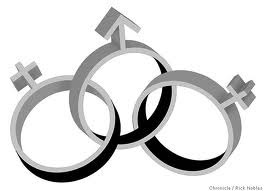 Recently, Tony Perkins of the Family Research Council reintroduced a tired refrain: Legalized gay marriage could lead to other legal forms of marriage disaster, such as polygamy. Rick Santorum, Bill O’Reilly, and other social conservatives have made similar claims. It’s hardly a new prediction – we’ve been hearing it for years. Gay marriage is a slippery slope! A gateway drug! If we legalize it, then what’s next? Legalized polygamy?

We can only hope.

Yes, really. While the Supreme Court and the rest of us are all focused on the human right of marriage equality, let’s not forget that the fight doesn’t end with same-sex marriage. We need to legalize polygamy, too. Legalized polygamy in the United States is the constitutional, feminist, and sex-positive choice. More importantly, it would actually help protect, empower, and strengthen women, children, and families.

For decades, the prevailing logic has been that polygamy hurts women and children. That makes sense, since in contemporary American practice that is often the case. In many Fundamentalist Latter-day Saints polygamous communities, for example, women and underage girls are forced into polygamous unions against their will. Some boys, who represent the surplus of males, are brutally thrown out of their homes and driven into homelessness and poverty at very young ages. All of these stories are tragic, and the criminals involved should be prosecuted to the fullest extent of the law. (That goes without saying, I hope.)