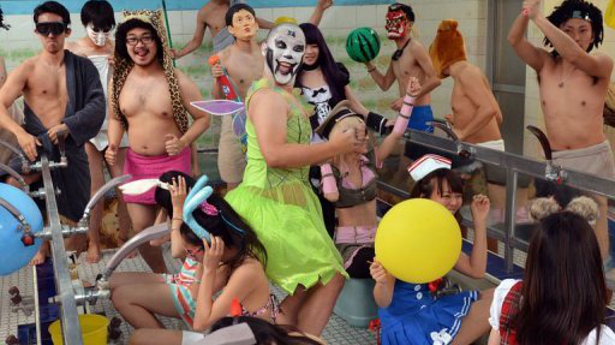 Japanese exhibitionists took the Harlem Shake into a bathhouse and a centuries old shrine on Sunday as they brought the YouTube phenomenon to Tokyo.

Even as the meme appeared to be all but played out elsewhere on the Internet, dozens of people came to show off their gyrating and humping.

Following the familiar format, several men — all covering their modesty — are seen scrubbing themselves in a traditional communal bathhouse, ignoring the man with a loincloth who emerges from the water to perform solo.

Suddenly the music kicks in and — with a simple edit — the entire room is wearing outlandish costumes and grinding in time to the beat.

The group of men and women then moved on to repeat the exercise at Akasaka Hikawa Jinja, a Shinto sanctuary in the Japanese capital.

“This is a phenomenon that is going viral abroad, and we wanted to show what we in Japan can offer,” said Keisuke Tanaka, 24, a businessman who helped organise the filming.

Going door to door. Make sure you have your photo ID ready!

How Lootz Became a Pirate

How Does A Carburetor Work? | Transparent Carburetor at 28,546 fps Slow Mo -

Where to get some of this cool swag - those 'Ernie Wan Kenobi' T's at Porcfest :)