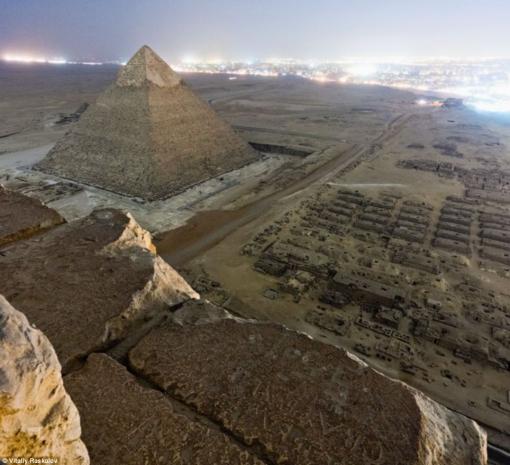 These photographs capture the views from the top of one of the Seven Wonders of the Ancient World.

A group of Russian tourists waited until official visiting hours were over at Egypt's famous Giza Necropolis, before scaling the enormous Great Pyramid as the sun began to set.

The Russians managed to escape the attention of security guards at the ancient site, allowing photographer Vitaliy Raskalov to snap pictures of the surrounding desert and the majestic Sphinx from the top of the 455ft structure. Vista: The Russians claim to have arrived early at the famous site on the outskirts of Cairo, where they waited in the shadows until official visitor opening hours were over to make their climb

Officials in Egypt put a stop to people attempting to climb the pyramids in the 1980s, but it thought some guides will still take tourists part of the way up the structures in exchange for bribes.

More... Moment a photographer was almost eaten by crocodileThat's one way to get Mum's attention! Cute polar bear cub bites parent's tail... and is rewarded with a cuddle

The group of Russians claim to have arrived at the complex early and waited in the shadows before starting their climb as night began to fall, according to a report on the English Russian.

The Great Pyramid of Giza is the oldest of the Seven Wonders of the Ancient World and the only one to remain largely intact.

It is thought to have been built as a tomb for an ancient Egyptian pharaoh over a period of around 20 years up to 2560BCE.

The pyramid was originally covered by highly polished white casing stones that formed a smooth outer surface, but centuries of erosion mean the structure's stepped underlying core is visible today.

It is thought to be made up of around 2.3million limestone blocks believed to have been transported from nearby quarries.

Originally towering at 481ft, the Great Pyramid was the world's tallest man-made structure for over 3,800 years.

Today it stands at 455ft tall, and is dwarfed by the 2,717ft Burj Khalifa in Dubai, which currently holds the title of world's tallest building. Feat: Originally the Great Pyramid, which is thought to have been constructed over a 20 year period, was covered by casing stones that formed an outer surface - what is visible today is the underlying core structure Sphinx: The group captured the majestic Sphinx monument from their perch atop Giza's Great Pyramid - the oldest and largest of the three pyramids in the Giza Necropolis Erosion: The Great Pyramid is made up of an estimated 2.3million limestone blocks, thought to have been transported from nearby quarries Fresh perspective: A group of Russians waited until evening fell and climbed the Great Pyramid of Giza, capturing the views from the top of the ancient structure on camera Scale: At 481ft, the Great Pyramid - thought to have been built as a tomb for a fourth dynasty Egyptian pharaoh - was once the tallest man-made structure in the world Ancient: Egyptian authorities put a stop to visitors climbing the pyramids in the 1980s, but it is thought some guides have been known to accept bribes to take tourists part of the way up View: The group of Russians said they found signs on top of the pyramid featuring notices in various languages Wonder: The archaeological site on the outskirts of the Egyptian capital is made up of the Great Pyramids, the Sphinx, several cemeteries, a workers' complex and an industrial village