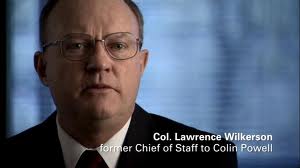 Inside the Washington Beltway today, everyone thinks the budget is the primary issue for the military. It isn't.

Far more serious for the health of America's Armed Forces are two issues ripping at their very soul: sexual assault and the lack of religious freedom. Besides breaking the law, the first destroys irreparably the bond so important to military servicemembers; the second contains the potential to destroy the Constitution.

I joined the Advisory Board of the Military Religious Freedom Foundation to stand alongside Mikey Weinstein and do my part in preventing that destruction.

Lawrence Wilkerson is the Distinguished Visiting Professor of Government and Public Policy at the College of William Mary in Williamsburg, VA. He also taught for six years in the University Honors Program at the George Washington University in Washington, DC (2006-2011).

His last positions in government were as Secretary of State Colin Powell’s Chief of Staff (2002-05), Associate Director of the State Department’s Policy Planning staff under the directorship of Ambassador Richard N. Haass, and member of that staff responsible for East Asia and the Pacific, political-military and legislative affairs (2001-02). Before serving at the State Department, Wilkerson worked as a consultant to General Powell (1997-2000). Before that, he served 31 years in the U.S. Army, including as Deputy Executive Officer to then-General Colin Powell when he commanded the U.S. Army Forces Command (1989), Special Assistant to General Powell when he was Chairman of the Joint Chiefs of Staff (1989-93), and as Director and Deputy Director of the U.S. Marine Corps War College at Quantico, Virginia (1993-97).

During the course of his military service, Wilkerson was awarded the Distinguished Service Medal with Oak Leaf Cluster, the Legion of Merit, the Distinguished Flying Cross, and the Bronze Star among other awards and decorations. At the Department of State, he earned the Secretary’s Distinguished Service Award, as well as two Superior Honor Awards. Since leaving the State Department, Wilkerson has spoken to groups all over America—World Affairs Councils, university and war college audiences, and members of local and state governments and the U.S. Congress and their staffs. In addition, he has been published in The American Conservative, Playboy Magazine, the Los Angeles Times, the Baltimore Sun, the Miami Herald, the New York Daily News, and other magazines and newspapers across the country, as well as appeared on television with Stephen Colbert, Bill Maher, Keith Olbermann, Ed Shultz, Lawrence O’Donnell, Rachel Maddow, Wolf Blitzer, the BBC’s Hardtalk and Newsnight, and others. He has appeared in several recent documentaries also, including Alex Gibney’s “Taxi to the Dark Side” and Charles Ferguson’s “No End in Sight”. He was also chairman of the U.S.-Cuba 21st Century Policy Initiative at the New America Foundation from 2006-2010.

Lawrence and his wife, Barbara, live in Falls Church, Virginia. Their son, Alex, was a USAF officer/ navigator in C-130s for ten years and now serves fulltime in the Tennessee Air National Guard, making his home in Nashville. Their daughter, Suellen, a former Army officer, now helps her husband manage a small farm in Mt. Airy, Maryland. Lawrence and Barbara have four grandchildren, Lance (12), Mary-Kaitlyn (11), Alexandra (10), and Mathew (6).