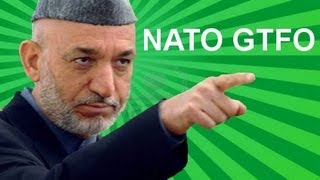 The head of NATO said on Monday it was "absolutely ridiculous" for Afghan President Hamid Karzai to accuse the United States of colluding with the Taliban and said Kabul should recognize sacrifices made by other countries on Afghanistan's behalf.

Karzai marred a debut visit to Afghanistan by the new U.S. defense secretary, Chuck Hagel, on March 10 by accusing Washington and the Taliban of colluding to convince Afghans that foreign forces were needed beyond 2014, when NATO is set to wrap up its combat mission and most foreign troops are to withdraw.