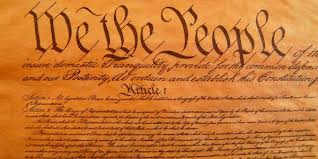 Many of these criticisms offer the open-minded some reason to at least consider the possibility that the document should be viewed in a light other than that with which is normally shed.
I would like to review some of these criticisms before I come to what I believe is the one, most fatal flaw in the document – the one defect that most directly exposes that the purpose of the document was to enable usurpation, and the one defect that renders as irrelevant the entire purpose that men might normally enter into such a pact, therefore making the document useless for this most important end.

4 Comments in Response to The Constitution’s Fatal Flaw

And nobody signed the Constitution because the taking of the Oath of Office is the way that everyone signs it as he takes office.

So, are we going to accept an affidavit from all the witnesses to the signing, stating that Obama signed it when he did it in secret? Won't he do it in public? I mean, even if he did it in private, he could do it in public a hundred more times just to show the people that he means it.

If we don't put in place a whole lot of mandatory, spelled-out punishments for Government Officials who go against the Constitution, there isn't any need for the Constitution farce.

Who wants the Constitution to exist more than anyone else? It is the Government Officials, Big Business, and the Power Elite that want it. Why? Because it pulls the wool over the eyes and minds of the public so that we the people think that there is some kind of force there to keep Government officials upholding their Government farce. And all the while they are working their way around any and every Constitutional provision.

The Constitution did not change the Confederation into a nation.The free colonies did not donate their free-hold lands. They merely ceded or sold land for specific political associations.

The colonies associated themselves as a federal society of independent nations, and dedicated land and buildings for local, domestic inter-national, or foreign-international purposes - which were expressed through "federal" representatives to the United States in Congress assembled.

After the War of Independence, the lands not organized as colonies were generally uninhabited, and  became "territories" of the United States of America, held in common by the 13 colonies, and were also referred to as the "United States" possessions. This was done through The Third Organic Document - The Northwest Ordinance, which promulgated managerial oversight of said United States possessions to the same government which was charged with representing the newly formed society of nations in inter-national and foreign affairs. Financial issues regarding these territories and other related affairs required a "more perfect" union.

These realizations are essential to preserving The Land of The Free. However, The Braves need to be

There are two issues with this article:

1.) The 'general welfare' clause is not the problem, the problem is that many have forgotten how to read English. General is the opposite of specific. There's a reason that they used this word. Obama care, for example, is designed to help specific individuals, this is not general and does not fall under the general welfare clause. The same would be true for social security. General welfare would help everyone equally in a general sense. There are not many things that fall into this category. Defense would be one, because everyone  benefits by not being invaded by a foreign invader. Also, the preamble does not enumerate any power to the government, because it is not part of the body of the constitution, which is where the powers are enumerated.

2.) The government's role is not to provide 'protection' for the people. It is to protect the rights of the People to protect themselves. This is why we have a second amendment and why the protection of property is not in the constitution. The government could not hire a policeman to stand at the front of everyone's house, this would be a total tyrannical police state! It would also violate the 'general' clause because it would be protecting people specifically.

The Constitution was always meant to be a "do nothing" document. The fact that people were convinced over the years that it was important in some way shows us the nature of people in general.

Well, now that we have this king Government, what are we going to do about it?

Not to worry. It is in the process of collapsing itself. I saw a great article in Freedom's Phoenix about Brazil - http://www.freedomsphoenix.com/News/124291-2012-12-12-brazil-is-one-of-the-few-truly-independent-countries-in.htm.

Brazilian Portuguese is a relatively language to learn. And it is so similar to Spanish (which is really easy to learn) that if you know Spanish, you have the whole of South America to choose from. Or you could start in Belize (English speaking) and work your way south.

Multitudes of Americans have moved out of the USA, and have found that their new life is better than the old one. They were thinking of returning after the USA revolution/civil war, but they have found that things are much better where they have gone... why go back?