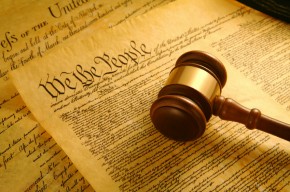 “Each state retains its sovereignty, freedom, and independence, and every power, jurisdiction, and right, which is not by this Confederation expressly delegated to the United States, in Congress assembled.”

The Tenth Amendment says: “The powers not delegated to the United States by the Constitution, nor prohibited by it to the States, are reserved to the States respectively, or to the people.”

1 Comments in Response to The Constitution or Liberty

Do you really think that we need a Federal Government anymore? An updated Articles of Confederation is probably the best answer to the problems of Government that we have today.

It would be to our best interests to have a working structure in place to protect ourselves from foreign invasion. The structure would only be there in form. It would be solidified into strength by the States, at times of true emergency.

If we EVER decided to dissolve the current U.S. Government, and bring back the Articles of Confederation in some form, it would be in our best interests to add the best parts of the Constitution and the Bill of Rights to all the state Constitutions as non-repealable amendments. This would help to keep us as a national unit at the same time that it would protect the peoples' rights throughout all the States.

The next thing to do would be to give counties that have large populations, more state-like autonomous governmental freedom... freedom from much of their own State's direction. If this is done, the counties should be given Constitutions that maintain all the freedoms in non-repealable amendment form as the State Constitution has, and as the current Constitution and Bill of Rights.

WE NEED BOTH, UNITY, AND FREEDOM TO SELF-GOVERN.