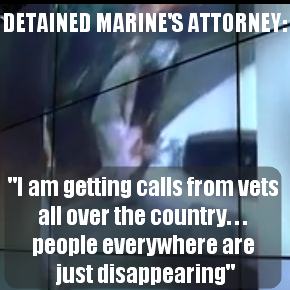 Marine Veteran Brandon Raub’s Attorney says he is getting calls from veterans and people all over the country reporting psychiatric detention for political speech.

Last Thursday, decorated former US Marine Brandon Raub, who served two tour of duties in Iraq and Afghanistan, was detained by the FBI and local authorities for posting controversial anti-government political comments on the social media site Facebook.

Although 26 year-old Brandon Raub was forcefully detained against his will for his political views he was not charged with any criminal misconduct a hallmark of the NAZI gestapo which used the tactic of indefinite psychiatric detention to crush political dissent.

He also made an appearance on GBTV with Glen Beck in which he made even more shocking revelations.

Whitehead tells Beck that he is getting calls from military veterans all over the country subjected to the same Nazi style psychiatric detention for their political views.

More alarming, is when Beck asked if people of left-wing ideology – specifically members of Occupy Wall Street – are being detained Whitehead responded  saying he can’t say for sure because people all over the country are just disappearing.

He also reveals that while Raub was in psychiatric detention one of the psychiatrists that he was seeing threatened to “brainwash” him and force him to take medication.

If you are thinking about joining the military, consider this, FIRST. You are setting yourself up as a direct target for military and police if you ever retire from the military. Why? Here's why.

Virtually all military personnel are taught how to use guns. Almost exclusively, they are all taught the basics of firearms - how to disassemble and reassemble rifles and handguns, and how to shoot them. The military needs its people to know about guns. They need people who know how to handle guns safely. They need people who are not afraid to use guns. This is one of the most important things that virtually ALL military people are taught - the ins and outs of guns, and using them.

What happens when you retire from the military, no matter the length of time you have been in? Are you still under the control of the military? Do you automatically forget everything that the military taught you about using guns? NO, to both questions.

Whatever your position on guns after you retire from the military, neither police or the military know what it is. And in today's anti-gun society, they can't afford to second guess YOU.

You had served your country honorably while in the military. You obeyed every order in a timely way. And when you retired to civilian life, you received an honorable discharge. But because you were taught all about guns, you also became an enemy of the anti-gun establishment, the Obama administration, the military and the police - all when you retired from the military.

A large portion of society does not know about guns. They think that they have seen people hurt by guns. They think that they have seen people get killed by guns. They don't understand that it is NOT guns doing the harm - that it is people harming other people - and they are afraid. They understand that people in the military are controlled in their gun usage, but they don't see the control that has been placed on retired military people - the military's good-gun-usage training that doesn't go away.

MTA To Start Issuing $50 Fines To Riders Not Wearing Masks