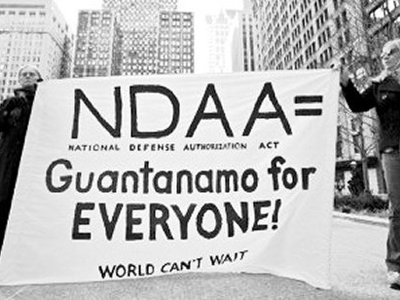 I love the United States and my fellow citizens, but our post-9/11 collective paranoia needs to end. Even with more than a decade of distance between us and that terrible morning, we continue to be stripped of basic civil rights by a government that appears to be acting in the interests of creepy "anti-terrorist" salesmen, rather than in the interests of the American people and our founding documents.

The PATRIOT Act: "Hastily passed 45 days after 9/11 in the name of national security, the Patriot Act was the first of many changes to surveillance laws that made it easier for the government to spy on ordinary Americans by expanding the authority to monitor phone and email communications, collect bank and credit reporting records, and track the activity of innocent Americans on the Internet. While most Americans think it was created to catch terrorists, the Patriot Act actually turns regular citizens into suspects," writes the ACLU.

See the ACLU's shocking info sheet here. Hundreds of thousands of us -- innocent American citizens -- may have had our online activities, financial records, and even our own homes searched under this disastrous law. PATRIOT Act provisions allow federal agents to do so, even without a warrant or proper court authorization, using something called a national security letter. And using "Sneak & Peek" searches, such agents can search your home and belongings -- without notifying you until later, according to the ACLU.