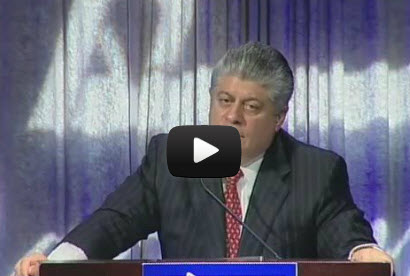 A 4 part video series shared by my friend Keith Broaders from http://constitutionalsheriffs.ning.com.

1 Comments in Response to Judge Napolitano Teaches the Constitution

Consider the following statements made in part 3 of 4:

2:38  Even though the Constitution begins with the words "We the People", in reality it was "We the States" that created the federal government.

3:53 The 9th and 10th amendments to the Constitution, which were soon added as a part of the Bill of Rights, made clear that Congress was only given the powers enumerated in the Constitution - and  all remaining  powers stayed with the States or the People.

In the first statement, the Judge asserts that "We the States" wrote the Constitution.  In the second, he acknowleges what the 9th amendment acknowleges:  both the states and the people have power in the federal system of government proposed by the Constitution.

So what is real?  Is a "state" real?  Are the people real? (Read "The Velveteen Rabbit" for more on this.)  No, a state is not real.  The original 13 colonies were the origin of the original 13 states.  These colonies in turn were fictitious entities which served the purpose of the sovereign, who (which) at that time happened to be the King of England.  Upon the ratification of the Constitution in 1789, "We the People" became the sovereign, based upon the definition of "republic" and the guarantee of "a republican form of government" in Article IV Section 4.  "We the People" were always real, even when the King of England would not acknowlege that and act accordingly.  "We the People" were the only "real" thing that could "ordain and establish this Constitution for the United States of America" (from the end of the preamble).

So I disagree with the statement made by the Judge at time index 2:38.  In both of my books (the second to be completed by year's end, hopefully), I write from the standpoint that the "more perfect union", the first objective of the Constitution listed in the preamble, is among the people, not among the states.  Again, the people are real.  States are fictitious entities.

Democratic vs Republic:  One viewer objected to the Judge's use of the phrase "our democracy".  I have to agree with that objection.  The USoA was established in 1789 as a Constitutional Republic, not a democracy.  In fact, the Judge acknowleges at some point that the legislative branch is democratic, but the judicial branch is not democratic.  In this, he is somewhat correct.  The legislators are elected democratically (by popular vote) and make legislative decisions based on voting, each legislator presumably voting in the best interest of the people who voted them in, or according to their will..  Judges are not popularly elected (in the national bodies of the court) and they make decisions based upon their interpretation of the Constitution.  Final decisions are based on what - votes!

The Judge also described the executive branch as a "democratic" branch.  While it is true that the person installed in office is selected based presumably on some reflection of votes cast by the people, his actions are bound by "the supreme law of the land", which includes the Constitution itself, legislation, and treaties.  It is hardly democratic.

It is true that the definition of a republic alludes to both supreme power being held by the people and their will being expressed though legislative bodies.  Despite the steps of the process that include voting, that does not render the USoA "our democracy".  The Judge's use of this phrase is unfortunate.

For the purposes of these comments, I will list 4 other bodies of the federal government:

All 4 of these other bodies existed prior to Ratification of the Constitution for the USoA.  State, county and municipal bodies in place at that time served the sovereign.  There was no reason to change those just because there was now a new sovereign (we the people).  Of course, the human bodies were also there before ratification.  Without those, would a union be possible or necessary?!

I see this series by the Judge appears to be a couple of years old, but despite these criticisms, he makes a few good points.  I found it worth my time to watch it.

Why Is Paper Money Constitutional?