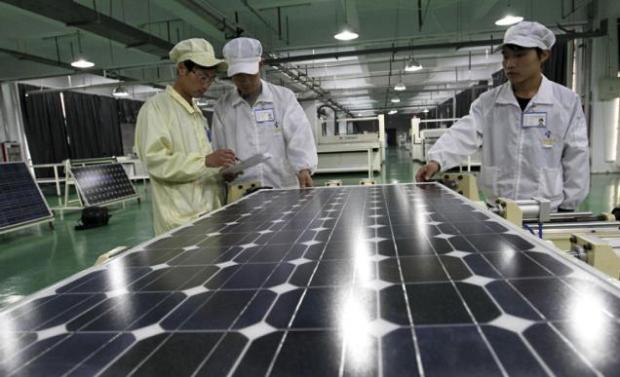 (Reuters) - The United States imposed punitive tariffs on solar panel imports from China, the latest in a series of trade disputes between the world's two biggest economies and sparking accusations by Beijing of protectionism.

The new tariffs of around 30 percent, much bigger than had been expected, were set on Thursday by the U.S. Commerce Department after it ruled in favor of local firms which said Chinese exporters were dumping cut-price panels on their market.

The size of the tariffs is larger than Chinese companies had expected and some analysts said it might prompt them to manufacture elsewhere or look for alternative markets.

"The U.S. decision lacks fairness and China expresses its strong displeasure", a spokesman for China's Ministry of Commerce, Shen Danyang, said in a statement posted on the ministry's website (www.mofcom.gov.cn).

"By deliberately provoking trade friction in the clean energy sector, the U.S. is sending the world a negative signal about trade protectionism," Shen said.

"We believe these measures by the United States damage China-U.S. cooperation in the renewable and clean energy sectors ... We hope the United States can appropriately resolve the relevant issues and take practical steps to respond to China's demands," Foreign Ministry spokesman Hong Lei said.

The tariffs apply to most top Chinese exporters, including Suntech Power Holdings Co Ltd and Trina Solar Ltd, at about 31 percent.

President Barack Obama, running for re-election in November, has promised to crack down on what he said are unfair Chinese trade practices.

The United States already has punitive duties on steel pipe, pencils, electric blankets and bedspring imports from China and was also reported in March to be investigating if imports of stainless steel sinks are sold at unfairly low prices.

Chinese officials have threatened to impose trade duties on U.S. shipments of polysilicon, the key material used in solar panels, if the U.S. moves to penalize Chinese solar companies.

"The anti-dumping ruling increases the risk of retaliatory action by Chinese government on U.S. polysilicon imports into China," Deutsche Bank said in a report.

The solar panel ruling follows a complaint filed last October by the U.S. subsidiary of Germany's SolarWorld AG, and six other U.S. companies that alleged unfair competition and had sought duties well above 100 percent.

"The decision sends a clear signal: free trade does not mean there are no rules," Frank Asbeck, chief executive of SolarWorld told Reuters.

"We expect the U.S. decision will serve as an impulse to the EU," Asbeck said, adding the company - whose shares rallied as much as 18 percent on the move - was still trying to file a similar complaint in Europe by mid-2012.

DZ Bank analyst Sven Kuerten cautioned: "While the tariff may help SolarWorld in the U.S., the Chinese modules will be sold into other markets, increasing the price pressure there, so we see no huge fundamental improvement for SolarWorld."

Their heavy reliance on subsidized U.S. and European markets has prompted criticism that loans from Chinese state-run banks and low prices gave the companies an unfair advantage.

Under the decision, 59 Chinese solar companies that petitioned Washington in the case will also face an import duty of about 31 percent, including Yingli Green Energy, LDK Solar, Canadian Solar, Hanwha solar One, JA Solar Holding and Jinko Solar.

Other Chinese companies could now face a 250 percent tariff, although those levels could be altered before the final ruling is issued by the Commerce Department in coming months.

The U.S. ruling, retroactive to cover imports dating back 90 days, comes two months after Washington set more modest tariffs of less than 5 percent on imports from China because of what it deemed Beijing's unfair support for its solar industry.

Suntech, the world's largest manufacturer of solar panels, which also operates a panel plant in Arizona, denied it sold below its cost of production.

"All leading companies in the global solar industry want to see a trade war averted. We need more competition and innovation, not litigation," Andrew Beebe, Suntech's chief commercial officer, said in a statement.

Yingli Energy and Trina Solar said they would actively defend their position in administrative proceedings.

There was speculation that Chinese companies could circumvent the restrictions by buying Taiwan cells and wafers for panels and assembling them outside the mainland.

"This is positive for Taiwanese players, which can come in and supply solar cells to U.S. panel makers that won't be buying from the Chinese," said Keith Li, analyst at CIMB Research.

Chinese companies had been bracing for a punitive duty of 15 percent, analysts said. Some have already started to look for markets beyond Europe and the United States.

"By late last year, we started shifting our focus away from the United States and into other growth markets like Japan," said Solargiga Energy Chief Financial Officer Jason Chow. "Japan has started offering attractive incentives for solar."

(Additional reporting by Christoph Steitz in Frankfurt, with Braden Reddall in Houston, Ran Li in Beijing and Twinnie Siu in Hong Kong; Editing by Phil Berlowitz and David Holmes)

ARRRRRH! My good friend Robert just purchased 6 large panels that doubled his current surface area for half what he paid for the others 8 years ago. And got "Edison Batteries" that were invented over 100 years ago that last so long that they are willed to the next generation (Nickel Iron batteries that almost never wear out and now can only be purchased from China... the technology was bought by a large battery company long ago so that they could keep selling their disposable Lead Acid Batteries)

Robert is now totally off of even having to buy fuel for his backup generator to run his A/C in the hottest hours of the summer.

The Utilities often charge $20,000 - $30,000 to even hookup to electrical lines when building in a rural area (even if the electrical lines are near by... 'cause they can) and for that much money you can make sure that you never have to pay an electrical bill again and live very well.

By building smart, using energy saving appliances and LED lighting you can finance an entire system WITH the battery storage and have a lower payment for the electrical independence system than the electrical bill and be totally independent when the system is paid off ($250 - $300 a month even with $15,000 to $20,000 is added in just interest over 10 years) THIS is what is freaking out the utilities. It's getting cheaper to get off grid so the tarriffs had to be increased to over 30%

There's you "Green" government for you.

Are we there yet?