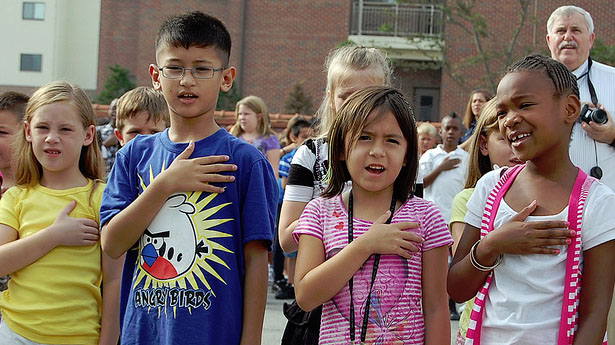 The announcement came hours after the ACLU sued the western Pennsylvania school district on behalf of a middle school student. The unnamed 13-year-old girl was allegedly scolded and given a detention for refusing to stand and recite the pledge.

According to WTAE.com, the girl refused to recite the pledge because she was disillusioned with the way the country was being run.
Her mother had complained to school officials, but the district upheld the punishment at a school board meeting.

Brownsville Area School District solicitor James Davis said the student had the right to sit silently during the pledge. He is working to resolve the case.

In 1943, the Supreme Court ruled that compelling students to recite the Pledge of Allegiance violated their First Amendment rights.
“If there is any fixed star in our constitutional constellation, it is that no official, high or petty, can prescribe what shall be orthodox in politics, nationalism, religion, or other matters of opinion or force citizens to confess by word or act their faith therein,” Justice Robert Jackson wrote.