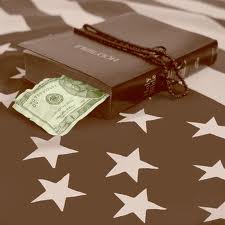 I’ve written before on the meaning of Romans 13, that chapter of the Bible which includes the admonition to “render unto Caesar that which is Caesar’s.” That chapter does not mean that Christians are to be ultimately beholden to their governments. In context, it is an indictment against violence, and a statement about the duties of government.

But today’s church ignores this. Today’s church is often a cheerleading platform for the state and the military as much as for God and for charity. The clearest examples of this are the flags which often stand behind the pulpit: the stars and stripes of the united states, and the Christian flag developed in the late 19th century. This represents a dangerous conflict of interest: are we to regard our allegiance to God as equal with our allegiance to the government?

The traditional separation of the church from the state in this country serves not only to keep religious law from interfering with the laws of the land, but also to protect religions from the state. Remember, the early Puritans, the ‘Pilgrims’ of the Thanksgiving story, fled England to escape the British crown’s oppression of their faith. While kings and governments are ordained and permitted by God, our universal submission to them is not; witness the children of Israel, resisting Pharaoh, and King Herod’s fear and persecution of Jesus.

When we stand the battle flag of our country in a church, we endorse an unholy union between the church and the state. No longer can we say “Go ye therefore unto all the world;” no, we say “Worship the government of this country.” We endorse all the wars and taxes and evils committed in the name of the state, claiming that they are done in the name of God as well.