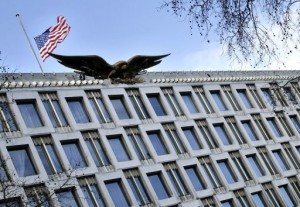 Speaker’s Corner is a lively section of Hyde Park (the London equivalent of New York’s Central Park) where debate and impromptu speeches take place.  It’s a public forum in its purest sense– people literally stand on a small box or stool to speak their minds about anything, often drawing large crowds of onlookers and hecklers.

Topics range from things like public policy to religion to the whereabouts of Elvis. Yesterday, for example, I saw one man stand on his box and proclaim that Mohammed is a false prophet. Naturally he attracted a crowd of Muslims who jeered him relentlessly… though the remarks remained light-hearted and peaceful.

Meanwhile, another crowed emerged nearby where two men were aggressively debating about the war in Libya. Another man was condemning capitalism to his audience, and yet another was decrying instances of racism in the United Kingdom.

It’s not all serious. One man was testing out his latest stand-up comedy material on a small crowd, and when he finished, he asked if anyone else would like to speak.

[Editor's note: what follows is obviously not a word for word transcript, but a brief summary of Simon's public remarks.]

“Ladies and gentlemen,” I began, “I’ve never done this before, but if I may impose on your attention for a few moments, I’d like to talk about something that may be extraordinarily uncomfortable for many of you.

“Does anyone know what today is?” Nods. Dull murmurs.

“That’s right.  10-years ago today, a terrible event took place in the United States that has shaped the course of human history and public policy more than anything else in the last decade.

“We can now think of the world as pre-9/11 and post-9/11. This event, and world government response to it, has transformed human civilization… affecting nearly all aspects of society.

“Think about how much has changed over the last 10-years. We’ve waged multiple wars around the world; we’ve drastically increased the role of government in our lives; we’ve changed the way we travel; we’ve abandoned basic privacies from personal finance to library records; we’ve seen police agencies become paramilitary organizations.

“People around the world are now forced to suffer extraordinary indignities in favor of the ‘greater good.’ A 70-year old woman cannot fly to visit her grandchildren without being molested by a government agent. A young girl cannot set up a simple lemonade stand without being cited by police officers.

“University students get body slammed and arrested for dancing at the Jefferson Memorial. People get detained and arrested all the time for things like taking pictures of public transportation… or recording their encounters with the police.

“Ladies and gentlemen– these incredible changes that have taken place around the world are derived from this single event that took place 10-years ago today. The implications have been so far-reaching and long-lasting that it’s imperative for rational, thinking people have an objective understanding of what happened.

“Folks, this is where things are going to get uncomfortable. I’m not here to tell you what happened that day, and I’m not here to spin any cloak and dagger conspiracy theories. But I am here to say that the government’s official explanation of what happened is full of holes– huge, gaping holes that would frustrate even the most dim-witted.

“Unfortunately, most people have emotionally-entrenched positions. Objective facts pointing out obvious flaws in the government’s story are outright rejected. Both the public and politicians dismiss scientific evidence as heretical lunacy as if we are all living in the Dark Ages.

“Seeking the truth can be a difficult and uncomfortable journey. The easy choice is to do nothing and go on accepting everything that you’ve already been told. But given how much this event has changed the course of history, I want to urge you to have the intellectual courage to do your own research… and follow it wherever it may lead you.”