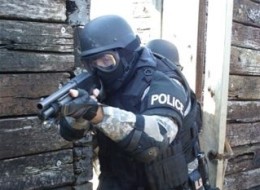 New York magazine reported some telling figures last month on how delayed-notice search warrants -- also known as "sneak-and-peek" warrants -- have been used in recent years. Though passed with the PATRIOT Act and justified as a much-needed weapon in the war on terrorism, the sneak-and-peek was used in a terror investigation just 15 times between 2006 and 2009. In drug investigations, however, it was used more than 1,600 times during the same period.

It's a familiar storyline. In the 10 years since the terror attacks of September 11, 2001, the government has claimed a number of new policing powers in the name of protecting the country from terrorism, often at the expense of civil liberties. But once claimed, those powers are overwhelmingly used in the war on drugs. Nowhere is this more clear than in the continuing militarization of America's police departments.

The trend toward a more militarized domestic police force began well before 9/11. It in fact began in the early 1980s, as the Regan administration added a new dimension of literalness to Richard Nixon's declaration of a "war on drugs." Reagan declared illicit drugs a threat to national security, and once likened America's drug fight to the World War I battle of Verdun. But Reagan was more than just rhetoric. In 1981 he and a compliant Congress passed the Military Cooperation with Law Enforcement Act, which allowed and encouraged the military to give local, state, and federal police access to military bases, research, and equipment. It authorized the military to train civilian police officers to use the newly available equipment, instructed the military to share drug-war–related information with civilian police and authorized the military to take an active role in preventing drugs from entering the country.

A bill passed in 1988 authorized the National Guard to aid local police in drug interdiction, a law that resulted in National Guard troops conducting drug raids on city streets and using helicopters to survey rural areas for pot farms. In 1989, President George Bush enacted a new policy creating regional task forces within the Pentagon to work with local police agencies on anti-drug efforts. Since then, a number of other bills and policies have carved out more ways for the military and domestic police to cooperate in the government's ongoing campaign to prevent Americans from getting high. Then-Secretary of Defense Dick Cheney declared in 1989, "The detection and countering of the production, trafficking and use of illegal drugs is a high priority national security mission of the Department of Defense."

The problem with this mingling of domestic policing with military operations is that the two institutions have starkly different missions. The military's job is to annihilate a foreign enemy. Cops are charged with keeping the peace, and with protecting the constitutional rights of American citizens and residents. It's dangerous to conflate the two. As former Reagan administration official Lawrence Korb once put it, "Soldiers are trained to vaporize, not Mirandize." That distinction is why the U.S. passed the Posse Comitatus Act more than 130 years ago, a law that explicitly forbids the use of military troops in domestic policing.

1 Comments in Response to A Decade After 9/11, Police Departments Are Increasingly Militarized

Has anyone here talked to a cop lately?..It`s like talking to an Alien from Mars.Today`s cops are even willing to destroy the lives of their own families by helping to build a future no free human would want to live in.

Remember! these;what ever they are,are not good for America,or,anywhere else for that matter.Find one.Try to carry on a normal conversation...impossible!!Today in American the cops are more than dangerous to humanity/freedom,as we have ever known it....find one! talk to it,and you`ll see just what I`m talking about.