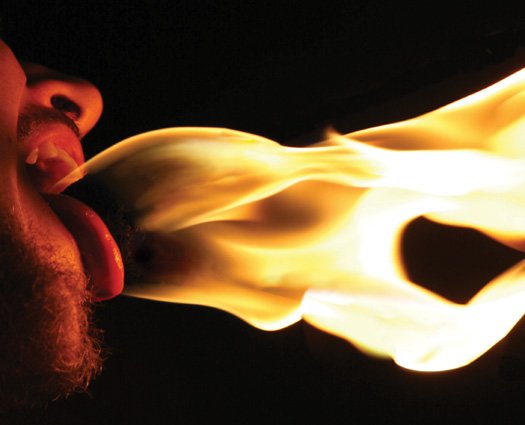 It is very hard to say. In February, the editors of The Guinness Book of World Records announced that the Infinity chili, grown by Nick Woods, the proprietor of a hot-sauce company in Lincolnshire, England, was the hottest pepper ever—more than 250 times as hot as Tabasco sauce. Just two weeks later, Guinness declared that the Infinity had been unseated by another British-grown hybrid, the Naga Viper.

Then things got complicated. The Naga Viper’s creator, Gerald Fowler, who runs the Chilli Pepper Company in Cumbria, England, says he simply cross-pollinated his pepper from three existing varieties: the Naga Morich, the Trinidad Scorpion and the Bhut Jolokia (also known as the ghost pepper, it has been studied extensively by the Indian Defence Research and Development Organisation, and took the Guinness title in 2006). Both Woods and Fowler had sent their peppers to be tested for spiciness at the horticultural research center at the University of Warwick, and the results were submitted to Guinness.
When Warwick’s labs rated Fowler’s Naga Viper equivalent to the combined strength of some 250 jalapeños, pepper experts balked. Jim Duffy, a chili grower in San Diego, criticizes Guinness for bestowing the title on insufficiently authenticated fruits. Dave DeWitt, the founder of Chile Pepper magazine, author of 35 books about chilies and an adjunct professor at New Mexico State University, flatly dismisses the Guinness record as well. “This is science, and they are a beer company,” he says, adding that test results should be corroborated by at least two labs. “With one test, the most you can show is that a single pepper--or a part of a single pepper--had that heat rating. To establish that a variety of pepper is consistently the world’s hottest, you need more than that.” Even Andrew Jukes, who conducted the pepper tests at Warwick on which Guinness based the Naga Viper and Infinity records, concurs: “I am surprised that all record values are not verified on additional samples in other labs. I’ve suggested to customers in the past that this would be required, but it seems that it is not.”