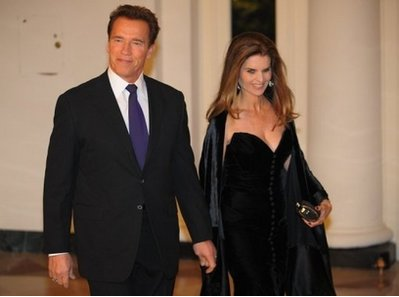 LOS ANGELES (AFP) – Movie megastar turned politician Arnold Schwarzenegger and his wife Maria Shriver have announced their separation, after 25 years of a high-profile personal as well as political marriage.

The Republican former California governor and Shriver -- a member of the Democrat-leading Kennedy dynasty -- have been living apart for a number of weeks, while they "work on the future" of their relationship, they said.

"This has been a time of great personal and professional transition for each of us," said a statement to the Los Angeles Times by the "Governator," who left office in January after seven years as California governor, and his wife.

"After a great deal of thought, reflection, discussion and prayer, we came to this decision together. At this time, we are living apart while we work on the future of our relationship."

The LA Times added that 55-year-old Shriver, a daughter of the storied Kennedy clan, had moved out of the couple's mansion in the upscale Brentwood neighborhood of Los Angeles.

Austrian-born former bodybuilder Schwarzenegger, a liberal Republican, has started to return to show business since he stepped down as governor, with plans for a "Governator" comic book and animated TV show.