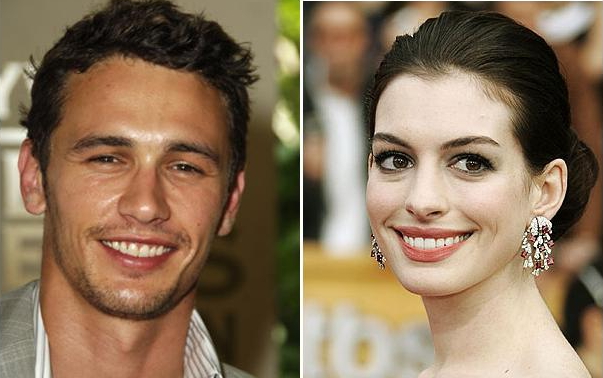 Oscar telecast producers Bruce Cohen and Don Mischer announced just now that "James Franco and Anne Hathaway personify the next generation of Hollywood icons— fresh, exciting and multi-talented. We hope to create an Oscar broadcast that will both showcase their incredible talents and entertain the world on February 27. We are completely thrilled that James and Anne will be joining forces with our brilliant creative team to do just that.”

Analyzes Deadline awards columnist Pete Hammond: "Part of the reason the Academy of Motion Picture Arts & Sciences feels comfortable going with these two is that both James Franco and Anne Hathaway have very successfully hosted Saturday Night Live. And they looked at that and felt these young actors could work in front of a live audience which is why in the past the Academy has gone to so many stand-up comedians. And, of course, the other factor is that they really 'young up' the Oscars this year. It's an interesting choice and certainly unexpected and bold."

EXCLUSIVE BREAKING NEWS 6:45 AM: I've just learned that the Academy of Motion Picture Arts & Sciences has asked James Franco and Anne Hathaway to host the 83rd annual Academy Awards on February 27th at Hollywood's Kodak Theater, and it "looks like" both young stars have accepted the offer. There is always the chance that one or both of them might back out because of prior commitments and other concerns. But my sources say the host announcement could be made as soon as this week. Both are starring in Fox movies out in theaters now: Franco in Fox Searchlight's 127 Hours, and Hathaway in 20th Century Fox's Love And Other Drugs. The star of Princess Diaries and The Devil Wears Prada, Hathaway did  a major dance and musical number with then host Hugh Jackman at the Academy Awards two years ago. Franco is also a multitalented actor who has taken risks in everything from the Spider-Man movie franchise to ABC's General Hospital. Both are equally adept at comedy and drama. Their selection, if it pans out, is an inspired choice and demonstrates how much current Academy president Tom Sherak wants to improve Oscar ratings.

What's most unusual about their hosting is that both thesps may be Oscar nominees themselves in the fiercely competitive Best Actor and Actress categories this awards season. Franco is considered a shoo-in for a nomination director Danny Boyle's thriller 127 Hours, the real life story of a trapped hiker who must choose between his arm and freedom. And Hathaway is more of a long-shot in director Ed Zwick's romantic dramedy Love And Other Drugs which opened soft at the box office this past weekend. That might be the main reason one or both of the stars decide to beg off. A decision like this to host the Academy Awards is made by committee with a star's agent, publicist, manager and even studio weighing all the pro and con options. Which is why the Academy has such a tough time finding good people every year to host because it can be such a career-altering decision. And even more so when the stars are this young.
---

House of the Dragon, the Game of Thrones successor, begins production

Blame Millennials For The Dramatic Surge In Cord-Cutting