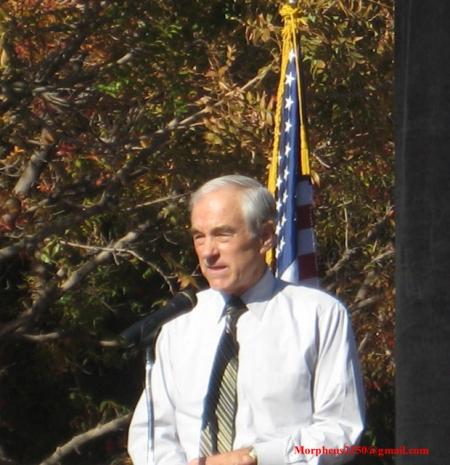 Ron Paul is wrong in his policies, and is wrong for America.
Ron Paul's refrain is that he is in fact the real conservative. This is far, correction, tremendously far from the truth. Ron Paul is an extremist, and a phony conservative. People get the false idea that libertarians like Dr. Paul are the same as conservatives. Though conservatives and libertarians do oppose collectivism, this is the only appreciable similarity between the two ideologies. Simply put, Ron Paul is not a conservative, and he is wrong. In this, I will discuss three ways in which Dr. Paul is wrong for America.
First, Ron Paul's foreign policy is a textbook example of the naive Jeffersonian school of thought. This school teaches that America must be aloof from the world stage and not "seek an empire", (e.g. Ron Paul's opposition to the War in Iraq). Tell me, how is defending yourself from crazed Jihadists bent on global chaos, "seeking an empire"? In the real world, we call it defending against wanton aggression.

4 Comments in Response to Ron Paul IS WRONG

Sarge Friday, your are a pitiful unweary soul diminished in your understanding of truth. Naive to the repugnant realities of those who have filed your head with the misinformation of a lifetime. You ignor the mischievious deeds of those you follow as you cannot bear to acknowledge the wickeness and evil of those you have so long admired as your leaders and protectors. For God's sake man, wake up.

Doesn't matter.  The US will collapse before Ron Paul's movement will grow large enough to change the course of this damned country.  Maybe if the Libertarian movement had gained traction in the 70's things would be better today.  Now we just have to watch, wait, and see how the empire crumbles.

LoL! This article is nothing more than Leftist Neo-CON fear-mongering in which it's better to just dismiss the nutjob Neo-CON CONspiracy theories about this supposed "wave of Jihadists" out to bomb granny duke and little Tommy.

9/11 WAS AN INSIDE JOB CARRIED OUT BY CIA AND MOSSAD! If you believe otherwise then it's you who is the traitor to our beloved Constitution and the American people.

Whoever wrote this diatribe is seriously drinking the Kool-Aid like it's going out of style. The question though is what flavor is that Kool-Aid?

Washington's warning about "entangling alliances" is attributed to Jeffersonian naivete...

"Jihadists" are "bent on killing us" (because it's Tuesday?/sunny?/cloudy?)...