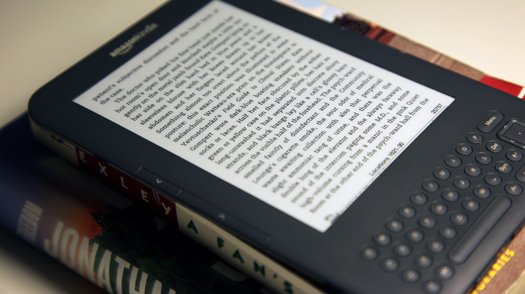 A few months ago, when I still lived in San Francisco, I used to go to a monthly event called Literary Death Match, in which well-lubricated writers read their work in front of a heckling panel of judges. It's somewhere between stand-up comedy and a drunk recital, with a tone a bit like that of the nearby-headquartered McSweeney's--slightly precious, highly literate, vaguely experimental, and often funny--only more profane. Once, at the end of the second reading, the author, who had her notes proudly type-written (like, with a typewriter) tossed her retro-affected sheets of paper into the crowd and shouted "FUCK THE KINDLE!"

It got a huge applause. Which was kind of uncomfortable for me, since I had my new Kindle 3 in my jacket pocket at the time.

I had just finished telling my roommate, a Death Match performer himself, how great it is, at some length. Yerp. But the thing is, the Kindle, especially the newest Kindle (sometimes called the Kindle 3), really is great, and writers and authors of every stripe should be embracing it. Readers already have.

The newest Kindle's most impressive achievement (among others, including a reduced size and a slashed price) is its E-Ink Pearl screen, which is just an absolute pleasure to behold. Read a Kindle for more than 10 or 20 pages and you'll forget you're using a gadget in place of an arcane piece of dead tree-pulp bound with glue--you get sucked right into it, and it feels just as natural as turning pages ever did. The newest Kindle's screen increases the contrast, decreases the refresh rate (leading to faster page turns, a common complaint about electrophoretic displays), and increases the battery life to a month. A month! Can you think of any gadget you use daily that lasts for a month on one battery charge?

It's the mix of familiar and new that makes it so easily preferable to books. It's not a computer that happens to be able to display text in book form--it's a book, digitally evolved. Like a book, it presents a static page, with ever-so-slightly lighter than true black text on a barely off-white background. Like a book, it's not backlit: You still need to have a light source, which should be good news to reading lamp makers everywhere, but it only gets more readable with more light. The Kindle loves the beach, just like a book.

But then, the ability to seamlessly and automatically sync your bookmarks between your phone, computer, and Kindle, or the ability to download books on the fly from anywhere, or look up an unfamiliar term right on the device--that's all very new.

It's that combination that's propelled me to forgo podcasts, music, and video clips on my morning commute for books. I've bought more books in the three months I've owned the Kindle than in the two years preceding them. That's largely due to the Kindle's screen: It really does feel like reading a book, sans papercuts and nostalgic superiority. It's the best reading experience I've ever had.

Fauci In The Hot Seat: Did He Lie To Congress?

Video: Graphene Oxide: A Toxic Substance in the Vial of the COVID-19 mRNA Vaccine