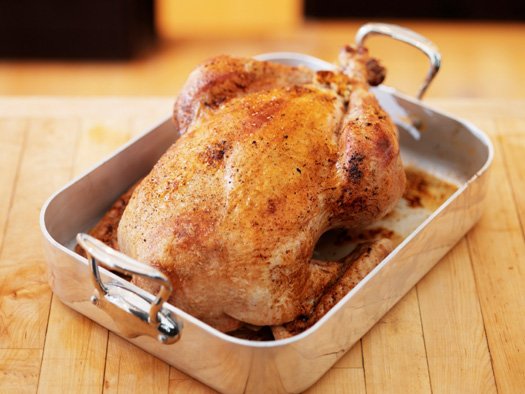 Since they were introduced 15 years ago, genetically modified foods have taken astonishing hold in North America. This time of year, the result is a Thanksgiving menu that may, on the surface, look much the same as the one your grandma cooked 20 years ago. But at the genetic level, it is very different, and it's a far cry from the fabled feast shared by the pilgrims and American Indians in the 17th century. In celebration of Thanksgiving, the most food-focused day of the year, here's a look at how biotechnology is changing the way we eat.

Before it reached the grocery store — even before it reached the farm — your turkey, turducken or tofurkey likely started out in a lab, with scientists in white coats peering at PCR data and tinkering with plant genomes to produce traits that nature never intended.

Let's start with your morning coffee. Unless you buy organic, your milk and half-and-half most likely comes from cows that have been administered synthetic hormones. The hormones rBST and rBGH let cows grow bigger faster, and allow them to produce more milk. Do you use soy milk instead? It's probably from GMO soybeans. How about sweetener? Fully 95 percent of the U.S. sugar beet crop is genetically modified, and half the nation’s sugar supply comes from beets. What about high fructose corn syrup? Of course. About 85 percent of American corn is genetically modified. Even sugarcane is genetically altered.

Starting with breakfast and ending with dessert, if you live in North America, you most likely eat transgenic foods every day.

Genetically modified crops usually contain genes from other plants to produce unique traits. In most cases, splices of bacterial genes are used to insert the new traits, like pest or disease resistance. Companies such as Monsanto and Bayer alter plants to resist their proprietary blends of weed killer, while other crops are modified to resist pests, fungi or bacteria; produce higher yields; or survive environmental conditions like drought or salty soil. GM food advocates say it’s essentially no different than selective breeding to obtain desirable qualities.

Consumer groups and natural-food advocates, on the other hand, say bacteria-enabled “Frankenfood” has no place in a healthy diet. They say genetically altered crops have not been sufficiently studied, and they worry that their effects on the environment and human health are unknown. Several court cases are progressing that seek to prevent future plantings of genetically modified crops, or at least subject them to stricter federal review.

Some groups maintain lists of non-GMO food sources; the Institute for Responsible Technology even has a non-GMO shopping guide iPhone app, or you can download the printable shopping list.

The easiest way to avoid genetically modified food is to buy organic — foods labeled organic cannot intentionally have biotech ingredients. But note the word intentionally. Seeds blow in the wind, so even fields used for organic farming may contain genetically altered crops. In a study this summer, GM canola was found growing in the wild throughout South Dakota.

Absolutely true [!] … the meal you enjoy in Thanksgiving Day is certainly isn't your grandma's feast. The food – turkey and vegetables -- have been genetically altered.

“Genetically modified crops usually contain genes from other plants to produce unique traits. In most cases, splices of bacterial genes are used to insert the new traits, like pest and disease [and truth] resistance.”

The Lies Vaccinologists Tell Themselves: