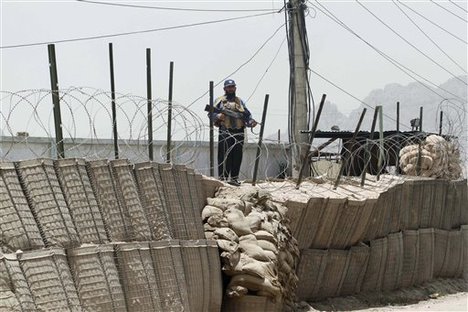 SHAHRI BUZURG, Afghanistan | For more than a year, police chief Rajab Mohammed and his men have worked out of a dark, cramped mud home while waiting in vain for workers to finish building the U.S.-funded police station across the street.

With winter fast approaching, some of the men, who had been sleeping in a dirt courtyard, recently took over the idle construction site and set up cots inside the half-built station after they learned that the U.S. government had fired the Afghan company responsible for the project.

The U.S. is spending billions of dollars to build facilities such as the one in Badakhshan province for Afghanistan’s expanding national police and new garrisons for its army.

The ambitious program is a linchpin of President Barack Obama’s strategy to strengthen Afghan security forces so 100,000 U.S. troops can go home.

However, like much of the wider Afghan reconstruction effort, it is faltering, according to current and former U.S. officials, Afghan and American contractors, and contract documents.

Dozens of structures across the country either were poorly constructed or never completed. Tens of thousands of Afghan soldiers who were supposed to be living in garrisons by now are still housed in tents.

The stations and barracks represent a pattern repeated across Afghanistan: Construction projects are failing with such frequency that the administration’s initiative to reinforce the Afghan security forces could be hobbled.

While American policy-makers struggle to find money to resuscitate the U.S. economy or rebuild infrastructure at home, American taxpayers are financing an unprecedented construction boom in Afghanistan for new schools and clinics, electricity and water, and roads and bridges.