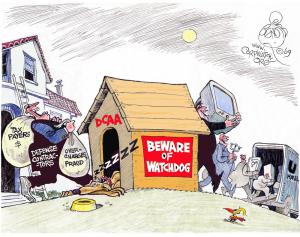 WASHINGTON — For years, the U.S. government has entrusted Michael Drannan with one of its most important foreign policy efforts: rebuilding Afghanistan.

Yet as Drannan's company won millions of dollars in government contracts in the war-torn country, he was never questioned about his unpaid U.S. taxes or his four months in a Florida jail over unpaid child support.

In all, McClatchy found nearly $4.5 billion in contracts that were awarded to companies even though they violated laws or had high-profile disputes over previous projects. Such legal or financial troubles could indicate that a company isn't prepared to finish a project or is prone to wasting taxpayer money.

The lax scrutiny, critics say, has created an American contracting culture where almost any past indiscretion can be overlooked.

"The government should care if someone hasn't paid their taxes," said Nick Schwellenbach, the director of investigations for the Project on Government Oversight, a Washington-based watchdog. "They should care if a company has admitted to overbilling."

Contracting giants are even more likely to get a pass than smaller companies because of a perception that some jobs are too big or too important to trust to an untested or smaller competitor and because political connections help pave the way to winning contracts, he said.

In other cases, the lapses can be blamed on the government's sloppy recordkeeping or inadequate background checks.

US Air Force partners with Electra on ultra-short takeoff aircraft