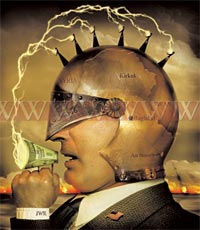 Stimulating the brain with a very low electric current can enhance a person's maths ability for up to six months, British neuroscientists said on Thursday.

Researchers at Britain's Oxford University studied 15 volunteers and demonstrated for the first time that electrical stimulation of the brain improved their performance in a series of maths assessments, and continued to do so half a year later.