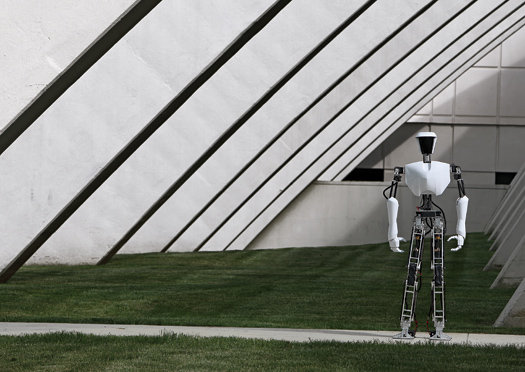 Let’s assume that someday you will have, in your home, a humanoid robot helper. The robot, because it’s shaped like you, can use your tools and move easily around your house. It folds the laundry, it helps your elderly mother up the stairs, and on Sundays it makes brunch for the family. It’s capable of handling almost any household chore you can throw at it.

Now let’s imagine that you’re out on the lawn, kicking a ball around with your son. Your robot helper is in another part of the yard, its back to you both, fixing a drainpipe. Your son misses a kick, and the ball winds up a few feet from the robot. “Hey, robot!” you shout. “A little help?” The robot turns in place, spots the ball, walks over, and kicks it back to you. The game resumes.

Of all the tasks you would undoubtedly love to hand off to a robot assistant, fetching a soccer ball is probably low on the list. And yet in 2010, there is no humanoid robot on Earth that can consistently do something as simple as turn, spot, approach, and kick. Never mind helping Grandma to bed or starching your shirts. Broken into a daisy chain of input, calculation and action, just kicking a ball is incredibly hard. It’s so difficult, in fact, that engineers from all over the world have embraced it as the modern era’s standardized test of humanoid-robot sophistication, and they converge each June at an event called RoboCup to try it. This year, only one adult-size, self-contained, humanoid robot in this country can even attempt it.

Its name is CHARLI-L (the “L” stands for “Lightweight” and the rest for “Cognitive Humanoid Autonomous Robot with Learning Intelligence”). Created at Virginia Tech, it’s America’s first true humanoid, in that it requires no remote power source or computer, it stands roughly five feet tall and has arms and legs, and it walks—left, right, left, right—like a human.

2 Comments in Response to The Loneliest Humanoid in America

Wow.  Talk about collectivist dreck!  Bleah!  What part of science (even PopSci) cheers on team "we"?

The video was interesting, right up until the point Hung said everybody wants a human servant.  He might have misspoken (meant humanoid) but that was particularly distasteful.

I can't wait for the robots.

I think that all the jobs on earth should be handed over to the robots... even their own repair. Then we can all go on welfare, collect 10 times as much, and live a life of ease.

If we get bored, the robots can train us in an occupation.

'Where is the Skynet logo?':

K-Max Titan: The first commercial heavy-lift helicopter with no pilot

China Unveils "AlphaDog" - An Affordable Alternative To The Terrifying "Robo-Dog

Walmart is investing in self-driving development with Cruise