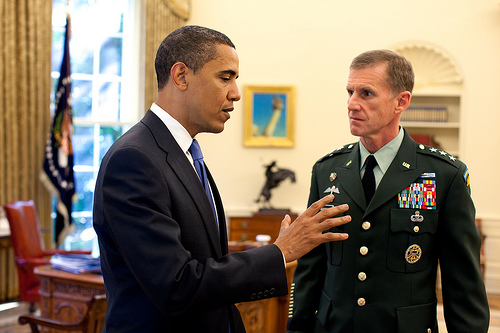 WASHINGTON — Nine days after a four-star general was relieved of command for comments made to Rolling Stone magazine, Defense Secretary Robert M. Gates issued orders on Friday tightening the reins on officials dealing with the news media.

The memorandum requires top-level Pentagon and military leaders to notify the office of the Defense Department’s assistant secretary for public affairs “prior to interviews or any other means of media and public engagement with possible national or international implications.”

Just as the removal of Gen. Stanley A. McChrystal from command in Afghanistan was viewed as President Obama’s reassertion of civilian control of the military, so Mr. Gates’s memo on “Interaction With the Media” was viewed as a reassertion by civilian public affairs specialists of control over the military’s contacts with the news media.

Senior officials involved in preparing the three-page memo said work on it had begun well before the uproar that followed Rolling Stone’s profile of General McChrystal. But they acknowledged that the controversy, and the firing of one of the military’s most influential commanders, served to emphasize Mr. Gates’s determination to add more discipline to the Defense Department’s interactions with the media.

“I have said many times that we must strive to be as open, accessible and transparent as possible,” Mr. Gates wrote in the memo, which was sent to senior Pentagon civilian officials, the nation’s top military officer, each of the armed-services secretaries and the commanders of the regional war-fighting headquarters. “At the same time, I am concerned that the department has grown lax in how we engage with the media, often in contravention of established rules and procedures.”

Marine leaves because of vaccine mandate. Biden and Fauci need to leave...