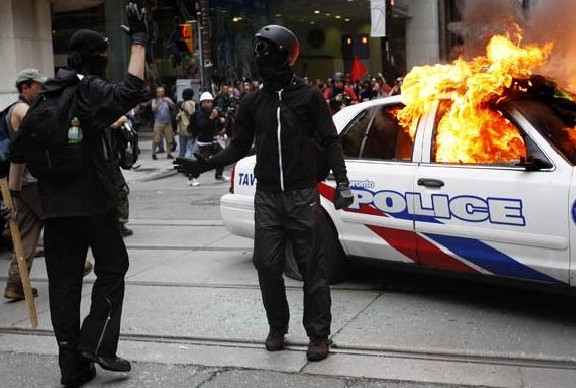 An eyebrow-raising photograph of one of the anarchists who set fire to a Toronto police car during anti-G20 protests this past weekend shows him wearing Nike clothing, a potential indication that provocateurs dressed up as black-bloc “anarchists” were again employed by authorities to cause mayhem in order to justify a brutal police crackdown and crush free speech, as peaceful protesters were attacked and arrested while the anarchists who torched the cars were left alone.

The picture shows the two culprits who set fire to the police car congratulating each other and looking remarkably relaxed about potentially being caught by police considering what they had just done. One of the men is wearing Nike pants – the distinctive logo of the company can be seen above his left pocket.

Why would a hardcore anarchists so dedicated to his cause that he is willing to torch a police car be wearing clothing made by a company that anarchists universally abhor, and one that has routinely been targeted by anarchists for well over a decade?

The authorities certainly wasted no time in responding to the mayhem the anarchists helpfully generated for them with brute force. After anarchists torched four police cars, reporters and other peaceful protesters were targeted with rubber bullets, with another Guardian journalist being repeatedly punched and elbowed by cops.

“A newspaper photographer was shot with a plastic bullet in the backside, while another had an officer point a gun in his face despite identifying himself as a member of the media,” reported the Canadian Press news agency.

“As I was escorted away from the demonstration, I saw two officers hold a journalist. The journalist identified himself as working for ‘the Guardian.’ He talked too much and pissed the police off. Two officers held him a third punched him in the stomach. Totally unnecessary. The man collapsed. Then the third officer drove his elbow into the man’s back. No cameras recorded the assault. And it was an assault.”

Paikin noted how middle class, peaceful demonstrators were being attacked and arrested by police, while the anarchists who provided them with the pretext to do so were nowhere to be seen.

“The police just started arresting people. I stress, this was a peaceful, middle class, diverse crowd. No anarchists. Literally more than 100 officers with guns pointing at the crowd. Rubber bullets and smoke bombs ready to be fired. Rubber bullets fired.”

“I have lived in Toronto for 32 years. Have never seen a day like this. Shame on the vandals and shame on those that ordered peaceful protesters attacked and arrested,” added Paikin

It's not that ample photographic and videographic evidence to support the same is not publicly available and not that the CA RCMP admitted this ON PUBLIC TELEVISION, THAT THEY HAD PAID OPERATIVES TO DESTROY PROPERTY, oh no, it's not that. No, not because it was admitted on the MSM, no way.

It's because, and I mean this literally, because every single cop in Canada played patsy for this bullshit ANOTHER TIME AROUND FOR MONEY. FOR A BASE PAYCHECK.

MAKING THE RCMP AND ALL OTHER CANADIAN LAW ENFORCEMENT PART AND PARTY TO CRIMES AGAINST THEIR OWN CITIZENS.

Yeah, it's kind of a downfall for CA. But you guys got a paycheck so WTF are you worried about? Like your American counterparts, you figure the milk-tit of the state will always be there for you and your pension and your happy retirement.

That should prove pretty interesting to you while you thought your combat armour made you invulnerable.If you answered "nobody, that's who" you are entirely correct. Now just sit back and relax as you watch 90 million armed nobodies react to your crap right here in the USA.

Tonight you go home to your kids after beating up ours.

I once got a beating from a father that decided he'd had enough of me picking on his son. Well now I'm that father and that son and we both got guns. Who you gonna pick on now Rudolph the Red Nosed Reindeer? And next time I see someone dressed in black, I'm not gonna ask for badge numbers because I DIDN'T SEE NO SHIELDS OR BADGE NUMBERS IN ALL THE FOOTAGE which renders you OUT OF UNIFORM and thus, no different from the other black dressed people bent on destruction.

Bottom line: I see black at my home and no identification, I'll assume you are all criminals and treat with you accordingly.