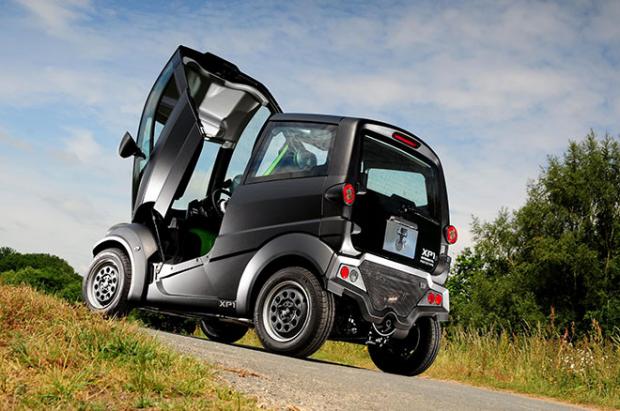 As the man behind some of the most successful McLaren Formula 1 cars and the incomparable McLaren F1 supercar, Gordon Murray has designed some of the fastest cars ever. Now he’s building one of the smallest. And most radical.

The British engineer finally unveiled his T.25 City Car, the Lilliputian runabout he’s spent three years developing. Although the 74-mpg T.25 and its T.27 electric sibling recall the microcars of post-war Europe, it’s quite advanced. Beyond using a tubular steel frame, composite materials and a canopy that opens like a Lamborghini’s doors, the T.25 will use a manufacturing process said to tremendously reduce capital, space and materials.

Many leading automakers are embracing compacts and subcompacts, which could comprise one-third of the U.S. market by 2013. But to say the T.25 is tiny is to say John Isner and Nicolas Mahut can play tennis. At just a hair over 4 feet wide and just shy of 8 feet long, it’s smaller than a Smart ForTwo or Toyota iQ yet can seat three.

A car that small opens up all kinds of possibilities in a congested urban setting. Parked nose to the curb, three will fit in a single space. With a turning radius of just under 20 feet, the car will almost literally turn on a dime. And the T.25 is so narrow you could drive two abreast.

Gordon Murray Designs says driving two abreast in a single lane during peak travel times could increase lane usage as much as three-fold, effectively easing congestion by allowing more people to use the road. That’s assuming traffic engineers and traffic laws would allow such a thing and motorists would be willing to cram themselves together to so tightly. Murray isn’t so naive as to think we’ll all be driving side-by-side in cars that could fit in the bed of a pickup truck. But he says a car like the T.25 “creates the opportunity to explore the possibility.”

Big-picture thinking aside, the car is still fairly revolutionary. It weighs about 1,200 pounds and measures 94.5 inches long, 51.1 inches wide and 55.1 inches tall. The driver sits front and center, with two passengers behind — an arrangement that mirrors the layout of the McLaren F1 road car. The canopy-style door swings upward to allow easy access in even the tightest parking spot.

We can hear you back there saying this car will be about as safe as a ride in a Red Bull can. But Murray — who designed F1 cars for Brabham and McLaren — designed the T.25 around a safety cell, and one only need witness Mark Webber’s horrific crash at the European Grand Prix to appreciate how strong a properly designed cell can be. The T.25 has a tubular steel frame and a composite floor, according to Autocar. It also has independent suspension front and rear, antilock brakes and traction and stability control.

Power comes from a 660-cc three-cylinder engine that produces 51 horsepower and 42 pound-feet of torque, making it about as powerful as the first-gen MG Midget (and about 400 pounds lighter). The car has a 5-speed clutchless transmission.

The diminutive drivetrain is good for a governed top speed of 90 mph and glacial acceleration — zero to 62 mph takes 16.2 seconds, about what a 1980 Toyota Corolla requires. That’s pretty freakin’ slow, but remember — Murray is billing this as a city car, not something you’re going to spend a lot of time driving on the freeway. Claimed CO2 emissions are 86 g/km and the car reportedly gets 74 mpg.

Murray says the T.25 could see production within two years using a process as innovative as the car. Murray calls it iStream. He’s spent 15 years developing it and calls it “a complete rethink and redesign of the traditional manufacturing process.”

The iStream process simplifies manufacturing by installing all of the major components on the chassis before fitting the body panels, which are pre-painted. That allows the car to be built in a smaller — and therefore more energy-efficient — factory. Cars can be built faster and more easily, improvements more easily adopted and capital expenses greatly reduced.

Murray is not some crackpot with a half-baked idea. Beyond designing Formula One racers from 1969 until 2006, he designed the McLaren F1, Mercedes-Benz SLR McLaren and Camparo T1 supercars. Gordon Murray Designs asked Holger Erker of the German engineering consultancy IPE Engineering to analyze iStream. Erker came away impressed.

Yea, such as they could just use the car as your coffin and bury you in it if some clown in a pickup ran a redlight and t-boned you?