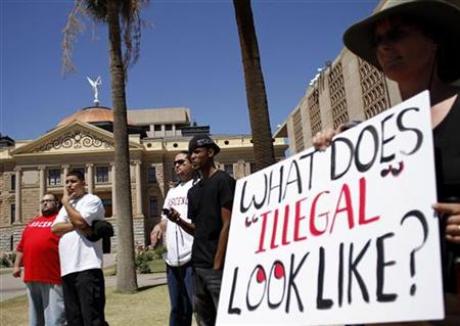 The Obama administration has a lot of fights on its hands. Putting aside real wars in Afghanistan and Iraq, there’s the battle against leaking oil in the Gulf, the struggle against 9.7 percent unemployment across the country, and clashes over the president’s agenda on Capitol Hill. Despite all that, the White House has found time to issue a new declaration of war, this time against an unlikely enemy: the state of Arizona.

The Justice Department is preparing to sue Arizona over its new immigration law. The president has stiffed Gov. Jan Brewer’s call for meaningful assistance in efforts to secure the border. And the White House has accused Arizona’s junior senator, Republican Jon Kyl, of lying about an Oval Office discussion with the president over comprehensive immigration reform. Put them all together, and you have an ugly state of affairs that’s getting uglier by the day.

First, the lawsuit. Last week, Brewer was appalled to learn the Justice Department’s intentions not from the Justice Department but from an interview done by Secretary of State Hillary Clinton with an Ecuadorian TV outlet. “It would seem to me that if they were going to file suit against us,” Brewer told Fox News’ Greta van Susteren last week, “they definitely would have contacted us first and informed us before they informed citizens … of another nation.”

“There certainly seems to be an underlying disrespect for the state of Arizona,” says Kris Kobach, the law professor and former Bush administration Justice Department official who helped draft the Arizona law. Kobach points out that during the Bush years, several states openly flouted federal immigration law on issues like sanctuary cities and in-state tuition for illegal immigrants. Respecting the doctrines of comity and federalism, the Bush administration didn’t sue. Now, when Arizona passes a measure that is fully consistent with federal law, the Obama administration, says Kobach, “goes sprinting to the courthouse door.”

Then there is the matter of the White House’s assistance, or nonassistance, in Arizona’s border-security efforts. On June 3, the president, under criticism for refusing to meet or even talk to Brewer, reluctantly granted her an audience in the Oval Office. After the meeting, Brewer told reporters Obama pledged that administration officials would come to Arizona within two weeks with details of plans to secure the border.

1 Comments in Response to Amid crises, Obama declares war — on Arizona

Hmm. The shifty Feds attack the shifty State National ID "papers please" law. Sometimes our tax dollars accidentally do go to work, and this could be one of those times, But it smells too good to be true.

BOMBSHELL: The Secrets Are Getting Leaked!