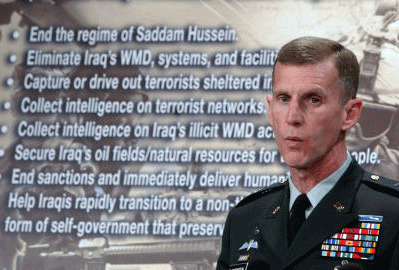 KABUL -- The top U.S. general in Afghanistan apologized Tuesday for a magazine article that portrays him and his staff as flippant and dismissive of top Obama administration officials involved in Afghanistan policy.

The profile in Rolling Stone magazine, titled the "Runaway General," is certain to increase tension between the White House and Gen. Stanley McChrystal.

It also raises fresh questions about the judgment and leadership style of the commander Obama appointed last year in an effort to turn around a worsening conflict.

McChrystal and some of his senior advisors are quoted criticizing top administration officials, at times in starkly derisive terms. An anonymous McChrystal aide is quoted calling national security adviser James Jones a "clown."

Referring to Richard Holbrooke, Obama's senior envoy to Afghanistan and Pakistan, one McChrystal aide is quoted saying: "The Boss says he's like a wounded animal. Holbrooke keeps hearing rumors that he's going to get fired, so that makes him dangerous."

U.S. ambassador to Afghanistan Karl Eikenberry, a retired three-star general, isn't spared. Referring to a leaked cable from Eikenberry that expressed concerns about the trustworthiness of Afghan President Hamid Karzai, McChrystal is quoted as having said: "Here's one that covers his flank for the history books. Now if we fail, they can say, 'I told you so.'"

A U.S. embassy spokeswoman said she had no immediate comment on the piece.

The magazine hits newsstands Friday. The Washington Post received an advance copy from the profile's author, Michael Hastings, a freelance journalist who has written for the Post.

This is from the Rolling Stone article:
"The entire COIN strategy is a fraud perpetuated on the American people," says Douglas Macgregor, a retired colonel and leading critic of counterinsurgency who attended West Point with McChrystal. "The idea that we are going to spend a trillion dollars to reshape the culture of the Islamic world is utter nonsense."

This one is choice: