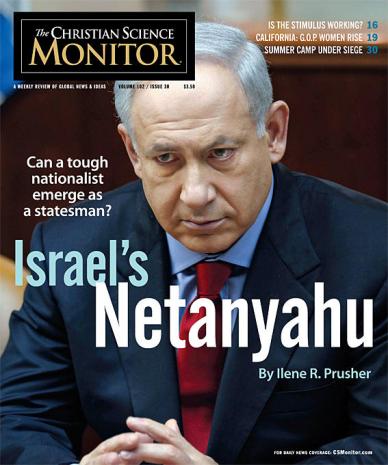 Jerusalem
It was one of those moments in Israeli politics – any nation's politics – in which the numbers just don't add up. Lawmakers had been toiling all night trying to fashion a budget. Now night had turned into dawn and debate into occasional tempestuousness when, at 7 a.m., Prime Minister Benjamin Netanyahu strode into the Knesset in his trademark crisp white shirt, designer tie, and dark suit.

Fourteen years ago, when he was prime minister the first time around, Mr. Netanyahu likely would have marched straight to his desk, crunched his numbers, applied his macroeconomic theories, and come up with his answers to the budget gap. Not this time, according to Yuli Edelstein, his minister of information and diaspora.

Instead, Netanyahu headed for the back of the room where rank-and-file members sat. He shook their hands, asked about their spouses, inquired about their kids.

IN PICTURES: The Gaza flotilla and the aftermath of the Israeli naval raid

"I saw him shaking hands with all kinds of backbenchers. I looked at this scene and said with wonder, 'Is this the same person from 17 years ago?' " recalls Mr. Edelstein. "Back then, he was too much of a policy wonk to do anything like that."

The scene illustrates one way in which Netanyahu has changed since his first tenure as prime minister from 1996 to 1999. Although perhaps still someone who prefers the lecturer's podium to backroom politicking, he has learned to excel at the glad-handing art of governance, which was remarkably absent the first time around. "In the beginning it was hard for him to understand that outside the world of big ideas you have to do a lot of political homework, to give recognition to people – to members of Knesset, to coalition partners," Edelstein says.