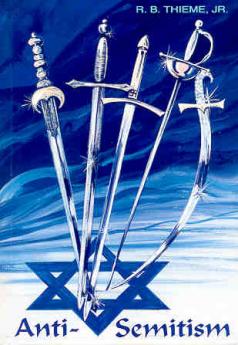 Suddenly it has become acceptable to again spin the same anti Semitic doggerel that infested human discourse prior to the defeat of Hitler. Yes it is been actively promulgated by the Islamic types, but it is the appearance of these threads among the leftist dreamers in the West that I find disconcerting. I had thought we had won the battle of education. That is obviously not quite true.

1 Comments in Response to Anti Semitism

It is extremely important to combat "anti-Semitism", which term is ill-coined, but we'll look past the high irony, and take it to mean "anti-Jewish racism" despite that the Jews are overwhelmingly non-Semitic. We will not take it to mean anti-Palistinian or anti-Arab racism, even though these latter groups are in fact actual Semites to which, had the term "anti-Semite" been properly coined, it would logically and literally apply.

1. Clarify the extreme distinction between Zionism and being Jewish. I have found that it's impossible to combat anti-Jewish, racist sentiment in someone that does not understand that being a Zionist has nothing to do with being a Jew, nor vice versa. Once they realize that the world's foremost and most credible anti-Zionist scholars and activists are disproportionately Jewish, you have your in. Failure to disentangle these two diametric ideas, Jew and Zionist, means racism must naturally flourish. This entanglement is artificial, and it is of course by design.

2. Clarify that Israel's power elite (and the majority of it's citizenry in general for that matter) are Jews in name only and in no sense seriously practice the religion or believe in God, nor in any way descend from historical "Jewish bloodlines". That is to say they are not Jews by genuine religious belief, and they certainly are not Jews by any form of ancient ancestry. The Ashkanazi are the secular, materialist descendants of various Europeans who converted to Judaism, sometimes en mass, for social and political reasons in, very roughly speaking, the middle-ages. The mitochondrial DNA markers simply do not lie. These same markers also disprove all that "Khazarian" nut-and-buttery tripe, incidentally.

3. Make it clear that Israeli Zionism is racist, traffics in racism, depends on racism, and that being a racist very directly supports the aims of Zionism. Make it clear that the ONLY justification for the continued existence of Zionism as well as for the illegal inception of Israel, was predicated on global anti-Jewish racism leading to the need for a geographical refuge. So absent racism, they've got NOTHING. (To combat Zionism, we MUST combat racism.)

4. When working on far-gone white-pride Neanderthal types (i.e. unwitting agents of Zionism) it might be necessary to delve into the extensive collaboration between Labor Zionism and the Third Reich. That ought to bend their little fuzzy-headed brains out of shape, since they can't have it both ways. If Hitler was so great, and he was working closely with the Zionists...well, how can Zionism be bad? Or conversely, if they think that persecuting and killing Semites is such a great way to spend your day, then, well, nobody kills Semites better or oftener than Israel. So wouldn't that make them good? You get the idea.

But nothing will stop the guilt-by-association that plagues Jews in general faster than what Jews are already doing in large rapidly increasing numbers: fighting Zionism loudly and proudly and saying "WE ARE NOT THAT". And this take real guts. Huge guts, because while AIPAC will point fingers at anti-Zionist Gentiles and call us all sorts of names and maybe go after our reputations and careers, they will more often assault and/or murder "self-hating" (i.e. rationally dissenting) Jews that dare to speak out.