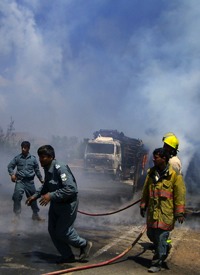 Is the United States indirectly funding the Taliban insurgents who are killing our troops in Afghanistan? The New York Times reported an ongoing investigation into whether private security companies hired to protect Western forces in Afghanistan are paying bribes to the Taliban to permit safe passage of military convoys and even to stage attacks on rival companies.

Congressman Dennis Kucinich (D-Ohio), a long-time opponent of the war, seized on the report and promised to use it as ammunition in the debate over further funding for what is now officially the longest war in U.S. history.

"In the coming weeks, Congress is expected to be asked to give another $33 billion for war efforts," Kucinich said in an e-mail to the website, Raw Story. "I will be bringing this report to the personal attention of individual Members of Congress prior to the vote on any additional war funding." Continued U.S. military presence in Afghanistan is "detrimental to our security," said Kucinich, who has twice run for President as an antiwar candidate. "The American people are paying to prop up a corrupt government that may be using our money to pay private companies to drum up business by paying the insurgents to attack our troops," he said.

The investigation was prompted by growing suspicions that some of the security firms are paying the Taliban for not attacking convoys transporting supplies to U.S. and NATO forces along highways where ambushes are common occurrences. Some of the firms are even suspected of paying the Taliban to mount attacks on competing companies.

"We're funding both sides," a NATO official told the Times on the condition of anonymity.